The Unexplored Depths of the Soul 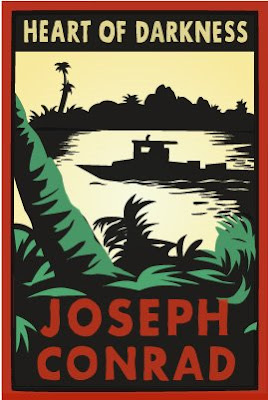 This week for 'A Book a Week' I read ‘Heart of Darkness’ by Joseph Conrad. What good timing! Laura has also read Conrad’s novella this week too; I appreciate having a reading buddy for this book.
Conrad was born in the Ukraine to Polish parents. ‘Heart of Darkness’ was written in his second language, English.
Our copy of this book has been sitting on our shelf since last summer. A good friend recommended it too me because I enjoy the work of E M Forster and was looking for something similar. I have started and failed to read it several times over. But it is only 111 pages long. Really, it can't be impossible to get through.
Five men are on a boat on the River Thames at sunset. (I can picture this. We live only a short walk away from the Thames. I have a head start.) 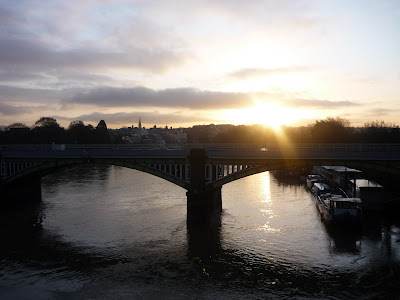 Marlow, a seaman and wanderer, tells his companions about his decision to follow a childhood ambition and travel into the heart of the African Continent. He decides to captain a steamboat for an ivory trading company. The previous captain was killed by an African chief’s son who was defending an elderly tribesman from the captain’s blows; ‘when an opportunity offered at last to meet my predecessor the grass growing through his ribs was tall enough to hide his bones. They were all there. The supernatural being had not been touched after he fell.’
As Marlow narrates his journey into the Congo, he describes more and more scenes of human suffering and terrible violence in horrible detail. A feeling of growing doom descends. There are abandoned villages, chain gangs of Africans; none of the white men seem to be achieving their ‘civilising’ goals, the ‘International Society for the Suppression of Savage Cultures’ [p71]. One such man ‘was looking after the upkeep of the road, he declared. Can’t say I saw any road or any upkeep, unless the body of a middle-aged negro, with a bullet-hole in the forehead, upon which I absolutely stumbled three miles farther on, may be considered as a permanent improvement.’ [p.29]
The deeper Marlow gets into Africa the more ancient, huge and primeval the forests seem. The Congo is ‘so hopeless and so dark, so impenetrable to human thought, so pitiless to human weakness.’ [p72]. By the time I got to this point in the story, I’ll admit, I thought this line summed up my experience of reading the book.
When he finally reaches his boat he finds that it has sunk. He must raise the boat and repair it, which takes months. He hears tales of a remarkable man called Kurtz who, reputedly, has had astonishing success in ivory collection and, by all accounts, is regarded as a god by one of the tribes. Kurtz ‘had the power to charm and frighten rudimentary souls into an aggravated witch-dance in his honour.’ In the end Kurtz has succumbed to his own savagery and the darkness he has indulged his soul in. The ancient wilderness ‘whispered to him things about himself which he did not know…and the whisper had proved irresistibly fascinating’ [p83].
When Marlow finally comes across Kurtz he is dying. Around his tent are shrunken heads. Officialdom has turned its back on him despite his great success in ivory collecting. His ‘methods’ are finally seen as repugnant. He has no medicine or supplies. His dying words are “The horror! The horror!”
Marlow returns to Europe and, a year after the death of Kurtz, takes some papers to Kurtz’s bereaved fiancée. She confidently talks of Kurtz in terms of being a wonderful irresistibly lovable man. She says how well she knew him; better than anyone knew him. Marlow bites his tongue. In the end she asks what Kurtz’s final words were before he died and Marlow tells her that he said her name.
This book was a great struggle for me to read. I disliked the lack of paragraphs. There was a heavy dose of abstract thought needed and I often felt lost in forest of text.
Moreover, I felt very uncomfortable with the frequent use of ‘n…..’ I felt quite alien to the reader of 1902 who would have seen this book through the eyes of Imperialism. The Holocaust, apartheid, Rwanda lead the 21st century reader to see only the removal of humanity in Conrad's African characters. We, the modern audience, are waiting for Conrad to ask more questions about the cruelty and injustice of Imperialism. Conrad had travelled along the Congo himself and the vividness of the writing reflects his intense experiences. There are some incredible images and the message of hypocrisy and the evils of Imperialism are clear to today's reader. Is this the way the book would have been read by the 1902 reader? Was it akin to us watching foreign correspondents on television in war-torn countries? Our consciences are run through the mill as we consider our responsibility in this human suffering. But is this the message of the book which was written to quite a different audience?
Laura read ‘Things Fall Apart’ as a companion piece. It is an excellent choice, being the parallel story of the invaded peoples of Africa. If you had to read only one of the two I would say Chinua Achebe’s ‘Things Fall Apart’ every time. It is also the much more readable of the two, without losing equally vivid writing. ‘Things Fall Apart’ has the voice of the real Africa that is so frustratingly and distressingly missing from Conrad’s work. ‘Heart of Darkness’ isn’t so much about Africa after all, but man’s unchecked journey into the darkest corners of his own humanity. We are left, cold, about the subject of Imperialism.
Next week I am going to find something fun to read.
Lorna normally blogs at Socks and Books
Posted by Ruskin