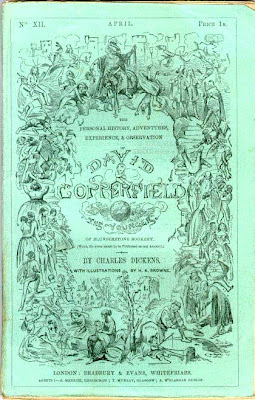 Grade A+ (of course)

Charles Dickens expressed his sorrow at laying down his pen after two years spent with David Copperfield. Despite its 1095 pages (Penguin Classic edition) I too wanted to turn the book back to its first page and read it all over again.
I shall miss Aunt Betsy. We are introduced early on to this formidable character and remain a little afraid of her for a good time after that. She is irritable with David's mother and leaves in disgust shortly after David’s birth when she learns that he is not a girl.
David is born fatherless but in his early years leads a happy life with his mother and their servant Peggotty. Then, in some harrowing chapters, David's mother is wed to the self-righteous and hard Mr Murdstone. Mr Murdstone and his equally cruel sister set about correcting David’s mother, send David away to school and then finally break David's mother's spirit to the extent that she and her new-born son die.
‘I don’t find authority for Mr and Miss Murdstone in the New Testament’ [Aunt Betsey, page 1043]
Left bereft by the Murdstones, school and finally child-labour, David walks penniless, from London to Dover, where he finds his Aunt's house. The cosy description of her home is our first indication of Betsey’s other softer side:
'the air from the sea came blowing in again, mixed with the perfume of the flowers; and I saw the old-fashioned furniture brightly rubbed and polished, my aunt's inviolable chair and table by the round green fan in the bow-window, the drugget-covered carpet, the cat, the kettle-holder, the two canaries, the old china, the punchbowl full of dried rose leaves, the tall press guarding all sorts of bottles and pots, and wonderfully out of keeping with the rest, my dusty old self upon the sofa.' [Page 242]
I wanted so much to live in that house. Before David comes to his Aunt’s home, the preceding chapters seem relentlessly dark; but the following chapters, when David is given hope and opportunity, are a mix of light and shade.
David Copperfield is not simply the biographical account of just one man; we follow the course of many lives – often with the same theme of the exploitation of the innocent and good by the cynical and sometimes down-right evil.
Later in the book we meet Uriah Heep, a young man of slimy white skin and no eyebrows whose, ‘damp cold hand felt so like a frog in mine, that I was tempted to drop it and run away.’ [page 469] Uriah is a true villain. He worms his way into people’s lives and sucks their worldly possessions and self-worth from them like a parasite.
Despite Uriah Heep’s extreme nature, I found none of Dickens’ characters caricatured. We can understand their motivations and explain every action; unlike many books, where characters are often only scenery, put in to serve only the plot.
For example, you might recognise this ‘promising boy of about twelve or thirteen’ and his mother, during a dinner party:
‘These observations……were interrupted by Mrs Micawber’s discovering that Master Micawber was sitting on his boots, or holding his head on with both arms as if he felt it loose, or accidentally kicking Traddles under the table or shuffling his feet over one another or producing them at distances from himself apparently outrageous to nature, or lying sideways with his hair among the wineglasses, or developing his restlessness of limb in some other form incompatible with the general interest of society.’
[Page 662]
Or recognise the awkwardness of David when he wants to impress two aunts of Dora’s and is told to ‘Pray, be seated.’
‘When I had done tumbling over Traddles [his friend] and had sat upon something which was not a cat’
[Page 740]
David’s house after he is first married sounds quite familiar too: ‘we were at once always cramped for room, and yet had always room enough to lose everything in.’
[Page 800]
David Copperfield is foremost about a young man’s quest for self-improvement and so I will leave you with one of my favourite lines to that end:
‘a man who has any good reason to believe in himself never flourishes himself before the faces of other people in order that they may believe in him’
[Page 860]