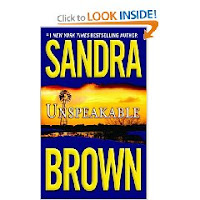 
Back Cover: "Carl Herbold is a cold-blooded psychopath who has just escaped the penitentiary where he was serving a life sentence. Bent on revenge, he's going back to where he began--Blewer county, Texas. Born deaf, lately widowed, Anna Corbett fights to keep the ranch that is her son's birthright, unaware that she is at the center of Herbold's horrific schemel, and that her world of self imposed isolation is about to explode. Drifter Jack Sawyer arrives at Anna's ranch asking for work, hoping to protect the innocent woman and her son from Herbold's rage. But Sawyer can't outrun the secrets that stalk him--or the day of reckonig awaiting them all..."

Unspeakable is a murder mystery, thriller and romance all thrown into one. Brown puts you into the head of all the characters from the violent world of Carl to the cushioned, isolated world of Anna, who is deaf and mute. Their worlds are about to collide when Carl escapes with revenge on his mind. He is out to kill the people who put him jail from the town's sheriff to his stepfather who threw him out of his house to Anna, his stepbrother's wife. Meanwhile, a drifter with ties to Carl and the town, comes to work for and protect Anna and her father in law from Carl. Who is Jack Sawyer really and why does he feel the need to protect Anna and her father in law?

The story is very well done, the characters are 3rd dimensional and it will keep you reading long into the night. Don't start reading it before you go to bed. However, be forewarned that due to the nature of the story, there is a lot of swearing and graphic violence.
Posted by Robin M