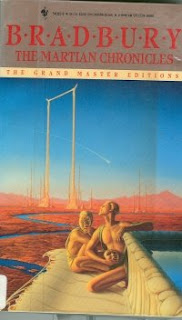 From the back cover:
Leaving behind a world on the brink of destruction, man came to the Red Planet and found the Martians waiting, dreamlike. Seeking the promise of a new beginning, man brought with him his oldest fears and his deepest desires. Man conquered Mars - and in that instant, Mars conquered him. The strange new world with its ancient, dying race and vast, red-gold deserts cast a spell on him, settled into his dreams and changed him forever. Here are the captivating chronicles of man and Mars - the modern classic by the peerless Ray Bradbury.

This was a very confusing book. At first I thought it was describing people on earth instead of Mars. I guess I have a preconceived idea of what Mars should look like and if their were Martians what they would look like. I can also understand one person, his name was Spender, that tried to stop the settling of Mars by humans. We would soon settle Mars and it wouldn't look like Mars anymore, it would look like Earth. All the Martian buildings, books, roads, and mountains would soon be gone or renamed with Earth names.