I recently joined the International Thriller Writers association which actively promotes writers, debut and seasoned authors of the Thrill genre. Yes, I am one of those struggling writers hoping to get published someday.

"International Thriller Writers, Inc., began with a dream. Until ITW, thriller authors had never organized. By nature, we tend to be loners, happy with our work and our families and a few close friends. But at the same time, because we're a relatively small community in the vast world about which we write, we also yearn occasionally for collegiality. For years, we've said to one another, "Why don't YOU organize us?" At which point, the thought was so overwhelming, the work involved so time-consuming, that we would gaze sadly around the group and shrug. There was no way."

They found a way and in 2004 the group was born. They have grown exponentially since then and published some very interesting books.    That is how I discovered the group.  I heard through the Blogosphere about Thrillers: 100 Must Reads and since I absolutely love thrillers, had to get it. 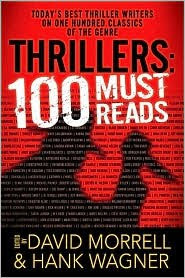 Edited by author David Morrell, co-founder of ITW and journalist Hank Wagner, the book is 100 essays written by well known thrill writers talking about which books influenced and have had the greatest impact on the genre.  Various authors give their thoughts on books they think were the greatest influences through out time from 1500 BC Theseus and the Minotaur to 1902 Joseph Conrad's Heart of Darkness to 1950 Graham Greene's The Third Man to 2003 Dan Brown's The Da Vinci Code.  What intrigued me the most was Steve Berry's thoughts on Dan Brown and The Da Vinci Code and how he helped to revitalize the thriller genre.

"The real contribution of Dan Brown and his marvelously inventive story is the effect that both he and his publisher had on the international suspense thriller.  Together they breathed life back into something that was all but dead.  And, in the process, opened up opportunities for those of us who were out there searching for a chance."

I happened to like the Da Vinci Code and read it twice, researching some of the things folks criticized and coming to the conclusion, things were being blown out of proportion.  It is after all - fiction.  Thrillers: 100 Must Reads is a must read and you can check out it out here and see a table of contents listing the essays included.  It's one of those books you keep going back to again and again, each time reading a new essay, discovering something new, then searching out the book they mentioned to read it.   It may take me a while to finish the whole thing.
Other publications which I hope to read in the future are: 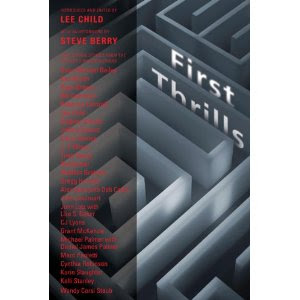 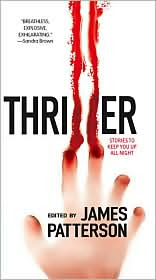 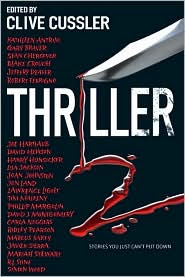 Thriller: Stories to Keep You up all Night Edited by James Patterson
Thriller 2: Stories You Just Can't Put Down. Edited by Clive Cussler
And a 2 part serial thriller written by 22 International Thrill Writer authors 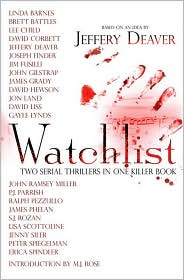 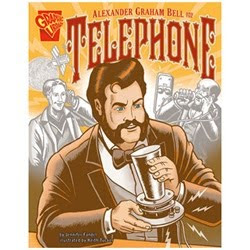 History. For many years, I considered history a boring topic. Very dry, put you to sleep, boring. After I started homeschooling, discovered a whole new way of learning about history from Susan Wise Bauer's Story of the world to This Country of Ours to living books to reading from original sources.  My son recently discovered graphic novels and has been devouring them as fast as he can get his hands on them.   While shopping for 5th curriculum I came across Capstone Press graphic history and science novels.  I checked them out online, liked what I saw and purchased a few.  Fortunately Timberdoodle had them on sale.    They are a great supplement to our study of American history, hopefully will spark his interest and make him want to learn more.
What interesting books about history have you discovered?
************************************

I just finished reading Outlander by Diana Gabaldon. It is one of those books that once you've finished it, you want to turn right around and read it again.  I'm in love with Claire and Jaime.

Back cover:  The year is 1945. Claire Randall, a former combat nurse, is back from the war and reunited with her husband on a second honeymoon--when she innocently touches a boulder in one of the ancient stone circles that dot the British Isles.  Suddenly she is a Sassenach--an "outlander"--in a Scotland torn by war and raiding border clans in the year of our Lord...1743.

Hurled back in time by forces she can't understand, Claire is catapulted into the intrigues of lairds and spies that may threaten her life...and shatter her heart.  For here James Fraser, a gallant young Scots warrior, shows her a love so absolute that Claire becomes a woman torn between fidelity and desire...and between two vastly different men in two irreconcilable lives."

What book are you in the mood for today?  Have you been hearing about a certain book in the news or noticed it in the bookstore and wondered if it is any good. Do you have a favorite author and no matter what they write, read all their books.  Where do you go to find out more about their books?   Why the blogosphere, of course.   Recently Online PhD programs announced the winners of the top 2010 50 book blogs.    There are quite a few people on the list - authors and bloggers who are well worth checking out.

I follow over 100 book, author and writing blogs and have discovered many old books, new to me authors, new and interesting books that I ordinarily wouldn't have read.  A few of my favorite book and author bloggers: 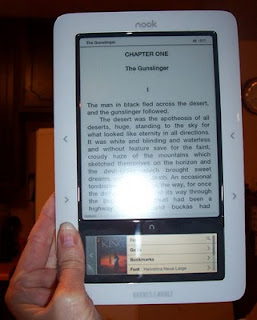 My Nook
E-book readers.  The market for ebooks and ereaders is growing quickly.  Last year when Barnes and Noble came out with their nook, I decided to buy one.  I had been lusting over Amazon's Kindle for a couple years, but the price and the fact I hate sprint, kept me from buying one.   What sold me on the Barnes and Noble Nook: AT&T's 3G Network and Wi-Fi enabled ereader. Plus the color touch screen -- cool! Other cool features - ability to download thousands of free ebooks from google and read up to 10 days before having to recharge the battery.
I love reading books - the physical experience of reading - the look and feel of the book, the pages and the smell. Or cuddling up on the couch or sitting out on the patio.   You can't do that with your laptop.   I wanted the convenience of an Ebook Reader, especially for traveling.  How many times have you paid the overweight baggage fee at the airport because of all the books you acquired on vacation or experienced the weight of your backpack killing your shoulders because the book you chose was too heavy?   Since I purchased my nook last year, Barnes and Nobles has come out with a less expensive version and gifted original nook owners with a web browser.
I really didn't think I would use the nook for everyday reading but have ended up using it 50% of the time.  Authors are making more of their books available only in ebook format. Plus there are many who are making some of their e-books free for a limited period of time.  Barnes and Nobles ereader blog Unbound is a wonderful resource and has great e-book offers and Free Fridays. I recently discovered WOWIO, who offers ebooks, comics and graphic novels. They have a Book of the Month which is free to download for the entire month.
A few resources for ebooks besides the major retailers are
Project Gutenberg
Ebooks.com
Feedbooks
Manybooks.net
Smashwords
Fictionwise

Check out the latest offerings from Barnes and Noble 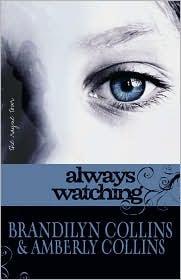 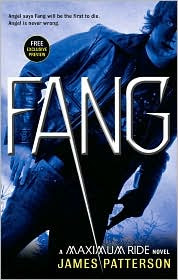 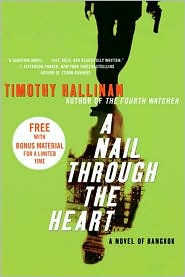 Thriller - A Nail Through the Heart
What books have you enjoyed reading lately on your ereader?  And if you don't have one, compare them all and tell me, which one would you be tempted to buy?