ARE YOU THERE GOD? IT'S ME, MARGARET

I read 2 books this week. They were both short books. "The Tale of Peter Rabbit" by Beatrix Potter was one. The other one is:

"Are You There God? It's Me, Margaret" by Judy Blume 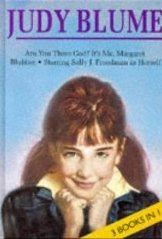 (from the inside flap)
Margaret Simon, almost twelve, likes long hair, tuna fish, the smell of rain, and things that are pink. She's just moved from new York City to Farbrook, New Jersey, and is anxious to fit in with her new friends--Nancy, Gretchen, and Janie. When they form a secret club to talk about private subjects like boys, bras, and getting their first periods, Margaret is happy to belong.
But none of them can believe Margaret doesn't have a religion, and that she isn't joining the Y or the Jewish Community Center. What they don't know is that Margaret has her own special relationship with God. She can talk to God about everything--family, friends, even Philip Leroy, the best-looking boy in sixth grade.

This is a very heart warming story of a young girl growing up. Margaret and her family is settling into their new house in a new town. She makes a friend right away. At the beginning of school they get a new teacher, a man teacher, which has them all giggling and wondering. These four girls form a club and they have things they have to do and talk about. The boy book is one. They have to list boys and talk about them. They also have to tell when they get their periods and when they get to wear bra's. The one thing that is different about Margaret is she doesn't have a specific religion like the other girls. But Margaret does talk to God. So Margaret decides to check out some of the other religions of her friends and her grandmother. This all comes about as a school project that is suppose to take the whole school year. Margaret has to make a report, but she can't. So she writes a letter to her teacher.
Posted by Sherrie