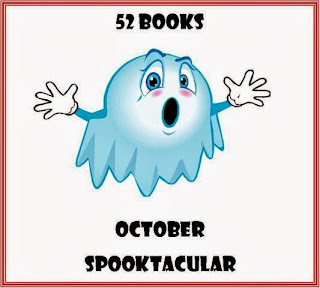 Are you ready for a Spooktacular Reading Month?   Or like some folks, did you get an early start in September.  If you haven't read Mary Shelley's Frankenstein or Bram Stoker's Dracula, now would be a perfect time to do so.  Wait, come back. Not right this minute, but this month.  *grin*    I've read them already, and thoroughly enjoyed them, although was really quite surprised because neither was quite what I expected.  Which is actually a good thing, because it keeps one from getting bored.  The mantra this month is expect the unexpected.

Spooky doesn't have to necessarily mean horror.  I'm definitely not into the blood and guts type of books, but do love a great nail biting, give me goose bumps, don't turn off the lights read.  And there are plenty of scary, spooky, chilling, thrilling books that are psychological fiction, paranormal or just plain old thrillers.

In that vein, I have a few spooky books on the shelves I will be reading and essentially still continuing with a Frankenstein and Dracula theme.

I've fallen in love with Dean Koontz and his Odd Thomas series so I am happy to say he wrote a series in which he reworked the Frankenstein theme.  I'll be tackling the first book Frankenstein: Prodigal Son. I'll let you know what I think or if I manage to make it through the whole book.

Every city has secrets. But none as terrible as this. His name is Deucalion, a tattooed man of mysterious origin, a sleight-of-reality artist who’s traveled the centuries with a secret worse than death. He arrives as a serial killer stalks the streets, a killer who carefully selects his victims for the humanity that is missing in himself. Detective Carson O’Connor is cool, cynical, and every bit as tough as she looks. Her partner Michael Maddison would back her up all the way to Hell itself–and that just may be where this case ends up. For the no-nonsense O’Connor is suddenly talking about an ages-old conspiracy, a near immortal race of beings, and killers that are more—and less—than human. Soon it will be clear that as crazy as she sounds, the truth is even more ominous. For their quarry isn’t merely a homicidal maniac—but his deranged maker.

Next up is Kim Newman's Anno Dracula series.  I read the first one a couple years back and it was quite imaginative, so I'm going to dive into The Bloody Red Baron


It is 1918 and Dracula is commander-in-chief of the armies of Germany and Austria-Hungary. The war of the great powers in Europe is also a war between the living and the dead. As ever the Diogenes Club is at the heart of British Intelligence and Charles Beauregard and his protegé Edwin Winthrop go head-to-head with the lethal vampire flying machine that is the Bloody Red Baron…


From new to me author C.C. Humprey's is his historical thriller - Vlad: The Last Confession which according to Booklist:


An unapologetic tale about a man who endured great losses and was driven by intense passion for his country and religion...the novel is aimed much more at readers interested in the historical origins of the Dracula stories than at those looking for another vampire story. As such, it succeeds admirably.


Neither do I think I could go wrong with Edgar Allan Poe's The Narrative of Arthur Gordon Pym and  Jules Verne's An Antarctic Mystery which was inspired by Poe's story and supposedly completes the mystery.  Plus H.P. Lovecraft's At the Mountain of Madness which was also inspired by Pym and takes place in the Antarctic.

And last but not least, The Historian by Elizabeth Kostova, another historical fiction novel about Vlad, the impaler, which I've already began reading:

Breathtakingly suspenseful and beautifully written, The Historian is the story of a young woman plunged into a labyrinth where the secrets of her family's past connect to an inconceivable evil: the dark fifteenth-century reign of Vlad the Impaler and a time-defying pact that may have kept his awful work alive through the ages. The search for the truth becomes an adventure of monumental proportions, taking us from monasteries and dusty libraries to the capitals of Eastern Europe

What spooktacular books will you be reading this month?