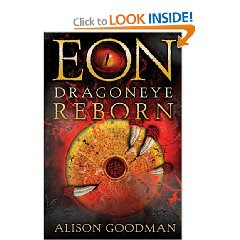 Front Flap: "Twelve year old Eon has been in training for years. His intensive study of Dragon Magic, based on East Asian astrology, involves two kinds of skills: sword-work and magical aptitude. He and his master hope that he will be chosen as a Dragoneye--an apprentice to one of the twelve energy dragons of good fortune.

But Eon has a dangerous secret. He is actually Eona, a sixteen-year-old girl who has been masquerading as a boy for the chance to become a Dragoneye. Females are forbidden to use Dragon Magic; it anyone discovers she has been hiding in plain sight, her death is assured. When Eon's secret threatens to come to light, she and her allies are plunged into grave danger and a deadly struggle for the Imperial throne. Eon must find the strength and inner power to battle those who want to take her magic...and her life.

Only Eon's master knows her secret and is risking everything for if Eon becomes a Dragon Eye, it will improve his standing with the emperor as well. No one takes Eon seriously because he was crippled in a accident and is weaker than the rest. When the most powerful and oldest dragon appears and chooses Eon, he is suddenly catapulted from obscurity into the rich opulent life of the palace and befriended by the emperor's son. The boy who nobody took seriously, now has more power and influence than imagined. LIfe is treacherous,especially since he is a she and his allies must help devise ways to keep her secret. Intrigue, battles, suspense, secrets, powerful allies and even more powerful enemies make for an interesting story. Highly recommended.


Other thoughts about Eon:

Becky of Becky's Book Reviews
"This is a compelling story set in a fascinating world. A power-hungry world in a way. A world with plenty of corruption. But an intriguing place all the same. Secrets. Mysteries. Ambition. Greed. Betrayal. The universal struggle of good versus evil. Good stuff."

Em of Em's Bookshelf
" I was never compelled to finish the series by Lian Hearn, whereas I am very excited to read the sequel to Eon. And the best thing about the Eon series is that it's a duology so I only have to wait for Book 2 to come out."

The Compulsive Reader
"he ending is heart stopping, and the complete cliff hanger will most certainly leave readers yearning for the conclusion of this smart and drama filled duet in the next book—whose title is too much a spoiler to reveal yet, but hopes to be just as riveting and breathtaking."
Posted by Robin M