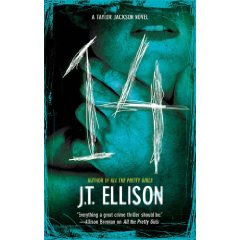 
Back Cover: " In the mid 1980's the Snow White Killer terrorized the streets of Nashville, Tennessee. Then suddenly the murders stopped. A letter from the killer to the police stated that his work was done. Now four more bodies are found, marked with his latest signature. The residents of Nashville fear a madman has returned, decades later, to finish his sick fairy tale. Homicide Lieutenant Taylor Jackson believes the killings are the work of a copycat killer who's even more terrifying. For this monster is meticulously honing his craft as he mimics famous serial murders...proving that the past is not forgotten."

Continuing my theme of first time author reads for the Spring Reading Challenge, I read J.T. Ellison's "14." Ellison is one of the authors who blogs at the group site "Murderati." I have been slowly making my way, reading books by all the authors who blog on the site and have to say, so far none of them have disappointed me.

"14" is a psychological thriller that will hold your attention every step of the way. Taylor is just a few days away from getting married, but she wants to solve and catch the murderer before she does. The story is a blend of her professional and personal life as she and her fiancee FBI profiler John Baldwin try to stop the madman from striking again. I don't want to give away any spoilers so suffix it to say, "14" is intense, creepy, and you never quite know what is going to be around the next corner. Don't start reading it right before you go to bed.

Michele - one "L"
"This was a very detailed, interesting plot that had me guessing throughout. Even when the killer is revealed to the reader but not yet to the lieutenant, there's so much drama and intrigue it kept me glued to the book. Quite fascinating, really."

Crimespree
“14 is a twisty creepy and wonderful book... Ellison is relentless and grabs the reader from the first page and refuses to let go until the soul tearing climax.”

Romantic Times - 4 1/2 Stars!
"Ellison's second Taylor Jackson story is precisely plotted and crisply written, and there are several effective twists. It's guaranteed to elicit shivers with its cold-blooded, sociopathic villain--and to keep readers on edge until the last page."
Posted by Robin M