Our author choices of the month are the literary novelist Maeve Binchy and crime fiction author John Connolly.

Maeve Binchy was born May 28, 1940 in Dun Laoghaire-Rathdown, Ireland.  She became a French language teacher and worked in a Jewish school. She was gifted with a trip to Israel and since she didn't have much money, went to work in a Kibbutz. She would send long rambling entertaining letters home to her parents which were so good, they sold them to the newspapers. Her writing career was born. She started working for the Irish Times in 1968 and My First Book, a compilation of the letters was published in 1970.  She wrote two short stories, Central Line in 1978 and Victoria Line in 1980. Her debut novel Light a Penny Candle was published in 1982.  She went on to publish 16 novels, various short stories, nonfiction and plays as well as write dramas for radio and television.  She passed away at the age of 73 in 2012.  Her very last novel, A Week in Winter was published after her death.  Chestnut Street, a collection of unpublished short stories she'd written during her life, was published in 2014. 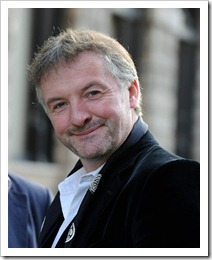 
John Connolly was born in Dublin in 1968.  After graduating from Dublin City University with an Masters in Journalism, he became a freelance journalist for the Irish Times.  He began writing his first crime fiction novel and introduced Charlie Parker to the world with Every Dead Thing in 1999 and he was awarded the Shamus Award for Best First Private Eye Novel in 2000.  He's written 17 books in the Charlie Parker series as well as other series - Chronicles of the Invaders with author Jennifer Ridyard,  Samuel Johnson, and standalone books including The Book of Lost Things.   His latest novel in Charlie Parker detective series, The Woman in the Woods will be released April 5th in the U.K and June 12th in the United States.

Find out more about John Connolly through A Q & A with John Connolly, a Guide to Charlie Parker,  Talks to Ginger Nuts of Horror and TLC Books interview with John.

Be sure to check out both Maeve Binchy and John Connolly soon!


For all our Brit Trippers, this week we'll be travelling through Nottinghamshire which is the famous home of everyone’s favorite outlaw and an interesting connection to the Pilgrim fathers.

Please link to your specific post and not your general blog link. In the Your Name field, type in your name and the name of the book in parenthesis. In the Your URL field leave a link to your specific post. If you don't have a blog, leave a comment telling us what you have been reading.   Every week I will put up  Mr. Linky which will close at the end of each book week.  No matter what book you are reading or reviewing at the time, whether it be # 1 or # 5 or so on, link to the current week's post.