BW37: Portrait of a Lady by Henry James 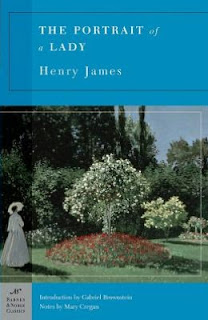 Book #14 in Susan Wise Bauer's list of great fiction in Well Educated Mind is Portrait of a Lady by Henry James. The story was first serialized The Atlantic Monthly and Macmillian's Magazine from 1880 to 1881, and then published as a book in 1881.

Amazon Synopsis: The heroine of this powerful novel is the spirited young American Isabel Archer. Blessed by nature and fortune, she journeys to Europe to seek her future, but what she finds may prove to be her undoing. She is courted by three men: an English aristocrat, an American gentleman, and a sensitive expatriate. Her invalid cousin becomes her benefactor and adviser. But it is after the ingenuous Isabel falls prey to the schemes of an infinitely more sophisticated older woman that her life takes shape.


Under certain circumstances there are few hours in life more agreeable than the hour dedicated to the ceremony known as afternoon tea. There are circumstances in which, whether you partake of the tea or not--some people of course never do,--the situation is in itself delightful. Those that I have in mind in beginning to unfold this simple history offered an admirable setting to an innocent pastime. The implements of the little feast had been disposed upon the lawn of an old English country-house, in what I should call the perfect middle of a splendid summer afternoon. Part of the afternoon had waned, but much of it was left, and what was left was of the finest and rarest quality.

Real dusk would not arrive for many hours; but the flood of summer light had begun to ebb, the air had grown mellow, the shadows were long upon the smooth, dense turf. They lengthened slowly, however, and the scene expressed that sense of leisure still to come which is perhaps the chief source of one's enjoyment of such a scene at such an hour. From five o'clock to eight is on certain occasions a little eternity; but on such an occasion as this the interval could be only an eternity of pleasure. The persons concerned in it were taking their pleasure quietly, and they were not of the sex which is supposed to furnish the regular votaries of the ceremony I have mentioned.

The shadows on the perfect lawn were straight and angular; they were the shadows of an old man sitting in a deep wicker-chair near the low table on which the tea had been served, and of two younger men strolling to and fro, in desultory talk, in front of him. The old man had his cup in his hand; it was an unusually large cup, of a different pattern from the rest of the set and painted in brilliant colours. He disposed of its contents with much circumspection, holding it for a long time close to his chin, with his face turned to the house.

His companions had either finished their tea or were indifferent to their privilege; they smoked cigarettes as they continued to stroll. One of them, from time to time, as he passed, looked with a certain attention at the elder man, who, unconscious of observation, rested his eyes upon the rich red front of his dwelling. The house that rose beyond the lawn was a structure to repay such consideration and was the most characteristic object in the peculiarly English picture I have attempted to sketch.

It stood upon a low hill, above the river--the river being the Thames at some forty miles from London. A long gabled front of red brick, with the complexion of which time and the weather had played all sorts of pictorial tricks, only, however, to improve and refine it, presented to the lawn its patches of ivy, its clustered chimneys, its windows smothered in creepers.

The house had a name and a history; the old gentleman taking his tea would have been delighted to tell you these things: how it had been built under Edward the Sixth, had offered a night's hospitality to the great Elizabeth (whose august person had extended itself upon a huge, magnificent and terribly angular bed which still formed the principal honour of the sleeping apartments), had been a good deal bruised and defaced in Cromwell's wars, and then, under the Restoration, repaired and much enlarged; and how, finally, after having been remodelled and disfigured in the eighteenth century, it had passed into the careful keeping of a shrewd American banker, who had bought it originally because (owing to circumstances too complicated to set forth) it was offered at a great bargain: bought it with much grumbling at its ugliness, its antiquity, its incommodity, and who now, at the end of twenty years, had become conscious of a real aesthetic passion for it, so that he knew all its points and would tell you just where to stand to see them in combination and just the hour when the shadows of its various protuberances which fell so softly upon the warm, weary brickwork--were of the right measure.

Besides this, as I have said, he could have counted off most of the successive owners and occupants, several of whom were known to general fame; doing so, however, with an undemonstrative conviction that the latest phase of its destiny was not the least honourable. The front of the house overlooking that portion of the lawn with which we are concerned was not the entrance-front; this was in quite another quarter. Privacy here reigned supreme, and the wide carpet of turf that covered the level hill-top seemed but the extension of a luxurious interior.

The great still oaks and beeches flung down a shade as dense as that of velvet curtains; and the place was furnished, like a room, with cushioned seats, with rich-coloured rugs, with the books and papers that lay upon the grass. The river was at some distance; where the ground began to slope the lawn, properly speaking, ceased. But it was none the less a charming walk down to the water.

The old gentleman at the tea-table, who had come from America thirty years before, had brought with him, at the top of his baggage, his American physiognomy; and he had not only brought it with him, but he had kept it in the best order, so that, if necessary, he might have taken it back to his own country with perfect confidence. At present, obviously, nevertheless, he was not likely to displace himself; his journeys were over and he was taking the rest that precedes the great rest.

He had a narrow, clean shaven face, with features evenly distributed and an expression of placid acuteness. It was evidently a face in which the range of representation was not large, so that the air of contented shrewdness was all the more of a merit. It seemed to tell that he had been successful in life, yet it seemed to tell also that his success had not been exclusive and invidious, but had had much of the inoffensiveness of failure.

He had certainly had a great experience of men, but there was an almost rustic simplicity in the faint smile that played upon his lean, spacious cheek and lighted up his humorous eye as he at last slowly and carefully deposited his big tea-cup upon the table. He was neatly dressed, in well-brushed black; but a shawl was folded upon his knees, and his feet were encased in thick, embroidered slippers. A beautiful collie dog lay upon the grass near his chair, watching the master's face almost as tenderly as the master took in the still more magisterial physiognomy of the house; and a little bristling, bustling terrier bestowed a desultory attendance upon the other gentlemen.

One of these was a remarkably well-made man of five-and-thirty, with a face as English as that of the old gentleman I have just sketched was something else; a noticeably handsome face, fresh coloured, fair and frank, with firm, straight features, a lively grey eye and the rich adornment of a chestnut beard. This person had a certain fortunate, brilliant exceptional look--the air of a happy temperament fertilised by a high civilisation--which would have made almost any observer envy him at a venture. He was booted and spurred, as if he had dismounted from a long ride; he wore a white hat, which looked too large for him; he held his two hands behind him, and in one of them--a large, white, well-shaped fist--was crumpled a pair of soiled dog-skin gloves.

His companion, measuring the length of the lawn beside him, was a person of quite a different pattern, who, although he might have excited grave curiosity, would not, like the other, have provoked you to wish yourself, almost blindly, in his place. Tall, lean, loosely and feebly put together, he had an ugly, sickly, witty, charming face, furnished, but by no means decorated, with a straggling moustache and whisker. He looked clever and ill--a combination by no means felicitous; and he wore a brown velvet jacket. He carried his hands in his pockets, and there was something in the way he did it that showed the habit was inveterate. His gait had a shambling, wandering quality; he was not very firm on his legs. As I have said, whenever he passed the old man in the chair he rested his eyes upon him; and at this moment, with their faces brought into relation, you would easily have seen they were father and son. The father caught his son's eye at last and gave him a mild, responsive smile.

"Have you drunk your tea?" asked the son.

"Shall I give you some more?"

The old man considered, placidly. "Well, I guess I'll wait and see." He had, in speaking, the American tone.

"Are you cold?" the son enquired.

The father slowly rubbed his legs. "Well, I don't know. I can't tell till I feel."

"Perhaps some one might feel for you," said the younger man, laughing.

"Oh, I hope some one will always feel for me! Don't you feel for me, Lord Warburton?"

"Well, I suppose I am, in most respects." And the old man looked down at his green shawl and smoothed it over his knees. "The fact is I've been comfortable so many years that I suppose I've got so used to it I don't know it."

"Yes, that's the bore of comfort," said Lord Warburton. "We only know when we're uncomfortable."

"It strikes me we're rather particular," his companion remarked.

"Oh yes, there's no doubt we're particular," Lord Warburton murmured. And then the three men remained silent a while; the two younger ones standing looking down at the other, who presently asked for more tea. "I should think you would be very unhappy with that shawl," Lord Warburton resumed while his companion filled the old man's cup again.

"Oh no, he must have the shawl!" cried the gentleman in the velvet coat. "Don't put such ideas as that into his head."

"It belongs to my wife," said the old man simply.

"Oh, if it's for sentimental reasons--" And Lord Warburton made a gesture of apology.

"I suppose I must give it to her when she comes," the old man went on.

"You'll please to do nothing of the kind. You'll keep it to cover your poor old legs."

"Well, you mustn't abuse my legs," said the old man. "I guess they are as good as yours."

"Oh, you're perfectly free to abuse mine," his son replied, giving him his tea.