Today is the start of Week 50 in the quest to read 52 books in 52 weeks and should have you starting book # 51. We are winding down the year with 2 weeks left and heading towards our goal of reading 52 books for the year.

We are winding down 2009, but looking toward 2010.  I've been perusing the blogs and Amazon and My Wish list is growing by leaps and bounds these days.    Imagine my surprise this week when I came across some books by authors I love and read that I wasn't aware of.   How did they slip by me? 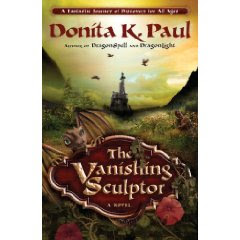 Vanishing Sculpture by Donita K. Paul. She is the author of The Dragon Keeper Chronicles, a christian fantasy series.


"Tipper is a young emerlindian who’s responsible for the upkeep of her family’s estate during her sculptor father’s absence. Tipper soon discovers that her actions have unbalanced the whole foundation of her world, and she must act quickly to undo the calamitous threat. But how can she save her father and her world on her own? The task is too huge for one person, so she gathers the help of some unlikely companions--including the nearly five-foot tall parrot Beccaroon--and eventually witnesses the loving care and miraculous resources of Wulder." - Donita K. Paul 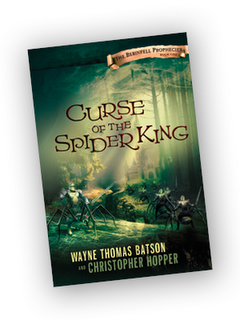 Curse of the Spider King by Wayne Thomas Batson.  He is the author of the ya christian fantasy series The Door Within trilogy and also the swashbuckling pirate books Isle of Fire and Isle of Swords.

"The Seven succeeding Elven Lords of Allyra were dead, lost in the Siege of Berinfell as babes.  At least that's what everyone thought until tremors from a distant world known as Earth, revealed strange signs that Elven blood lived among its peoples. With a glimmer of hope in their hearts, sentinels are sent to see if the signs are true. But theirs is not a lone errand. The ruling warlord of Allyra, the Spider King, has sent his own scouts to hunt down the Seven and finish the job they failed to complete many ages ago.

Now 13-year-olds on the brink of the Age of Reckoning when their Elven gifts will be manifest, discover the unthinkable truth that their adoptive families are not their only kin. With mysterious Sentinels revealing breathtaking secrets of the past, and dark strangers haunting their every move, will the young Elf Lords find the way back to the home of their birth? Worlds and races collide as the forces of good and evil battle.  Will anyone escape the Curse of the Spider King?" - Amazon.com

Then there is Charles De Lint 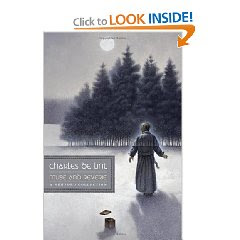 Muse and Reverie which was just released on December 8th. I have enjoyed reading all the books in the Newford Series so looking forward to reading this collection of short stories.

"Muse and Reverie is an all-new collection of short fiction in Charles de Lint’s “Newford” universe—the fifth such collection since 1993, and the first since 2002. Previous collections are Dreams Underfoot, The Ivory and the Horn, the World Fantasy Award-winning Memory and Dream, and Tapping the Dream Tree.

The city of Newford could be any city in North America, bursting with music, commerce, art, love and hate, and of course magic. Magic in the sidewalk cracks, myth at the foundations of its great buildings, enchantment in the spaces between its people. In this new collection, de Lint explores that magic and those spaces, shedding new light on the people and places that readers of novels like Moonheart, Forests of the Heart, The Onion Girl, and The Mystery of Grace have come to love." - Amazon.com


And one I discovered through Shelf Awareness: 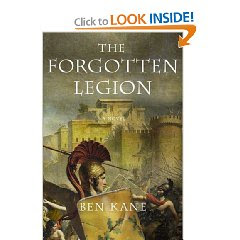 Ben Kane's The Forgotten Legion.  It will fit in nicely with my historical fiction challenge.

"This may be the only historical novel in which a principal character is a proto-Etruscan nationalist. In this lively and often riveting first novel, Kane captures much of the chaos, brutality, and splendor of the late republic in the first century BCE, when Rome was ruled by the First Triumvirate of Julius Caesar, Pompey, and Marcus Licinius Crassus. Curiously, the four main characters are from the underside of society, and each has reason to despise the power of the emerging Roman superstate. Tarquinius labors on a latifundium and bemoans the loss of Etruscan greatness and subservience to Latin cultural and political domination. Brennus is a great gladiator whose family fell victim to imperial expansion. The twins, Romulus and Fabiola, suffer the degradation of slavery. Each of them is caught up in one of the seminal episodes of the century, as Crassus, seeking military glory, launched an expedition against Rome’s archenemy in the East, Parthia. Kane clearly knows the history of the period, and his story is rich in accurate historical detail. The characterizations are finely drawn and set against a dangerous, cruel, but often thrilling landscape. --Jay Freeman"  Amazon.com 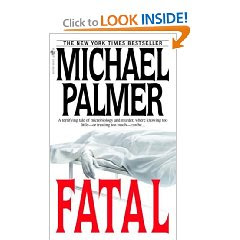 Fatal: I was perusing Michael Palmer's website the other day when he asked if I would like to review The Last Surgeon.  All his books sounded so good, but Fatal captured my immediate interest because of Micheal's  story behind writing the book.

"Palmer excels at packing current medical issues into a web of suspense. The action begins immediately as people in various cities become afflicted with some unknown malady with bizarre symptoms. Some die quickly from seizures and blood loss, others develop a progressive mental illness along with "Elephant Man"-like growths on their faces and bodies, culminating in uncontrollable violence. Dr. Matt Rutledge is certain that a case he has seen, involving a mine worker for the Belinda Coal and Coke Company, is related to the mine's criminal offenses. He was raised in the West Virginia town and lost his father to alleged safety violations, and his wife to a rare cancer. Certain that her illness was induced by groundwater contamination, Matt has a double score to settle with BC&C. Meanwhile, in Washington, DC, Ellen Kroft, member of the advocacy group PAVE (Parents Advocating Vaccine Education), is struggling with her vote as part of a group evaluating a new megavaccine, Omnivax. In Boston, medical examiner Dr. Nikki Solari has watched the mental deterioration of her talented roommate as strange growths appear on her face. Both Ellen and Nikki travel to Belinda in search of answers. As expected, the three protagonists get together and set about solving the medical mystery, with danger, attempted murder, and bureaucratic strangulation surrounding them. Palmer skillfully juggles many subplots, integrating colorful characters and using current bioscience topics. FDA testing, vaccines, environmental toxins, spongiform encephalitis, greedy pharmaceutical executives, and bad cops-all contribute to the novel's action, suspense, and intrigue."   Amazon.com

What did you find this week?

***Links to amazon are for informational purposes only.
Posted by Robin M