The Recipe Club by Andrea Israel and Nancy Garfinkel 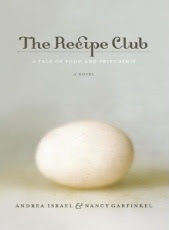 A Tale of Food and Friendship


Front Flap: Loyalty, loss and ties that bind. These are the ingredients of The Recipe Club, a 'novel cookbook' that combines an authentic story of friendship with more than 80 delicious recipes.

Lilly and Val are lifelong friends, united as much by their differences as by their similarities. Lilly, dramatic and confident, lives in the shadow of her beautiful, wayward mother and craves the attention of her distant, disapproving father. Val, shy and idealistic -- and surprisingly ambitious -- struggles with her desire to break free from her demanding housebound mother and a father whose dreams never seem to come true.

In childhood, "lilypad" and ValPal" form an exclusive two person club, writing intimate letters in which they share hopes, fears, deepest secrets--and recipes, from Lilly's "Lovelorn Lasagna" to Valeries "Forgiveness Tapenade." Readers can cook along as the friends travel through time facing the challenges of independence, the joys and heartbreaks of first love, and the emotional complexities of family relationships, identity, mortality, and goals deferred.

The Recipe Club sustains Lilly and Val's bond throughout the decades, regardless of what different paths they take or what misunderstandings threaten to break them apart...until the fateful day when an act of kindness becomes an unforgiveable betrayal.

Now, years later, while trying to recapture the trust they've lost, Lilly and Val reunite once more---only to uncover a shocking secret. Will it destroy their friendship, or bring them even closer?"

In an attempt to expand my reading repertoire, I accepted an offer from Caitlin of FSB Associates to read and Review "The Recipe Club." The premise is very interesting. The Recipe Club uses a unique method of telling a story using emails and letters between lifelong friends Lilly and Val. While the two girls are in elementary school back in 1964 they start writing each other letters and start the Recipe Club in which they exchange recipes with each letter. The story follows them through their high school years as each girl works to establish their own identities, yet find ways to remain friends. When they reach college age in 1973 they have a falling out and don't talk to each other again until 2000 when Val's mom passes away. Val seeks out Lilly again trying to re-establish their friendship and connection, while trying to work out their issues. A secret is discovered that will test their renewed friendship. The story is told mainly through the emails and letters until the later portion when the story unfolds in real time.

Mixed in with all the emails and letters are the recipes with unique titles taken from the story. Recipes such as "Ga-Ga-Gai Pan," "Conspiracy Apple Pie," "Wild Girl Wild Mushroom Salad," "Apple and Pear Friendship Fool" or "Enlightened Peanut Brittle."

The story really captures your attention and emotions and reminded me of friendships from elementary, through junior high and high school to college. How people change and grow apart, then back together. The Recipe Club is very interesting and I'm looking forward to trying out some of the recipes.

Thank you Caitlin for providing me with a courtesy (free) copy of The Recipe Club. Head on over to Written Voices to read an excerpt and check out an article "You are what you say, when you talk about what you eat"

Cheryl at Cheryl's Book Nook:
"I absolutely fell in love with Lilly, Valerie and the Recipe Club. Authors Andrea Israel and Nancy Garfinkel wrote with such passion."

Margot at Joyfully Retired:
"The remarkable thing about the novel is that it is told almost completely via emails and letters interspersed with their recipes. I say remarkable because I could understand everything that happened just from their letters and emails. This well-written story shows the spirit and character of their lives and the heart of their friendship."

Yvonne at Socrates' Book Reviews:
"The Recipe Club” is cleverly put together and readers will feel as if they are part of Valerie and Lilly’s world. A very enjoyable book that keeps readers captivated to the end."