This is my book for Week 20 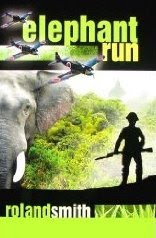 (from the back cover)
The year is 1941, and bombs are being fropped from the night sky, blanketing the city of London. When fourteen-year old Nick Freestone's apartment is demolished, his mother decides the sitution in England has grown too unstable, Nick will be safer, his mother hopes, living with his father in Burma on the family's teak plantation.
Nick arrives at the plantation eager to learn about the timber elephants raised and trained there, and also to spend time with his father. But before he can settle in, trouble erups in the remote Burmese village. Japanese soilders invade, and Nick's father is taken prisoner. Nick is stranded, forced towork as a servant to the new rulers. As llife in the village grows more dangerous for Nick and his young friend, Mya, they plan their daring escape, determined to rescue their families. But to succeed, they will have to brave not only the threat of enemy soldiers, but the dangers of their wilderness journey.

This is a book I bought at our school book fair a couple of months ago. I will admit the book cover grabbed me before I even read the back cover. This is wonderful book filled with lots of history about elephants and their mahouts, their trainers.
While Nick and Mya have to do what the Japanese solilders tell them, they have a family member, Mya's Great Grandfather, to help them out. He is a priest and is not harmed and allowed free rein of the Freestone plantation. He also knows where the secret tunnels under the house are and how to get to them. He leads Nick and Mya across the jungle to get Mya's brother and Nick's father out of the camps.
Posted by Sherrie