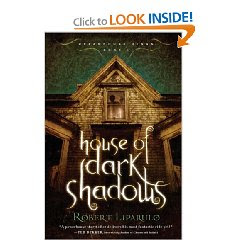 Back cover: "When the Kings move from L.A. to a secluded small town, fifteen year old Xander is beyond disappointed. He and his friends loved to create amateur films...but the tiny town of Pinedale is the last place a movie buff and future filmmaker wants to land. But he, David, and Toria are captivated by the many rooms in the old Victorian fixer-upper they moved into--as well as the heavy woods surrounding the house. They soon discover there's something odd about the house. Sounds come from the wrong directions. Prints of giant, bare feet appear in the dust. And when David tries to hide in the linen closet, he winds up in locker 119 at his new school. Then the really weird stuff kicks in: They find a hidden hallway with portals leadinng to far-off places--in long-ago times. Xander is starting to wonder if this kind of travel is a teen's dream come true...or his worst nightmare."

"House of Dark Shadows (Dreamhouse Kings Book #1)" is Excellent, excellent, excellent! Thoroughly enjoyed this young adult fantasy novel by Robert Liparulo. From the very beginning of the story which starts 30 years in the past to the very end which ends in a to be continued cliff hanger, made me want to run right out and buy book # 2 "Watcher in the Woods." Unfortunately Borders didn't have it, but I did manage to pick up a few other interesting books - a tale for later. Next stop, Amazon. :)

The prologue pulls you in immediately:

"The walls of the house absorbed the woman's screams, until they felt to her as muffled and pointless as yelling underwater. Still, her lungs kept pushing out cries for help. Her attacker carried her over his shoulder. The stench of his sweat filled her nostrils. He paid no head to her frantic writhing, or the pounding of her fists on his back, or even her fingernails which dug furrows into his flesh. He simply lumbered, as steadily as a freight train, through the corridors of the big house." pg 1 - 2

When the Kings move into the old Victorian house in Pinedale, weird things start happening. Xander and his little brother, David, discover a hidden corridor with many doors that seems to go on forever. And in each room is a different set of items from various periods in history. The boys find out what happens when they put on these items and unlock different doors to adventures that could be the end of them. Highly recommended.

Other thoughts about House of Dark Shadows:

Bobbi of Bobbi's Book Nook:
"Although this is considered a Young Adult book, adults will also enjoy the suspense and mystery this book has to offer. This is the first book I have read of Liparulo's, but it certainly won't be the last. "

Becky of Becky's Book Reviews:
"The book is action-packed. It's well paced. If you like adventures of the spooky sort. Part science fiction. Part adventure. Part mystery. It offers much to readers of almost all ages. (I'd say ten and up if I had to label it at all.)"

Rel of Relz Reviewz:
"The great descriptive writing made me feel scared for the boys and I almost felt like I was in the story. I loved how all the pieces of information fitted in at the end and completed the story (unfortunately, I can’t talk about the surprise at the end)."
Posted by Robin M