"A Carribbean Mystery" by Agatha Christie 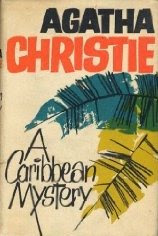 (from the front flap)
Miss Marple is on a holiday at the Golden Palm Hotel in the island of St. Honore, She is enjoying herself, yet there is something lacking. At home in St. Mary mead there was always something going on, something one could get one's teeth into.
Miss Marple listens politely to Major Palgrave's boring stories of his early life in Kenya--or at any pretends to listen. She is not paying much attention when he starts telling her about a murderer he has know and when he reaches in his wallet to show Miss Marple a snapshot of that murderer, he is suddenly interrupted. Murder follows.

This is a wonderful and mysterious book my Agatha Christie! Really good! Miss Marple has to figure out why Major Palgrave's is murdered. Then an employee of the hotel is murdered. You have some romance and some cheating of husband and wives. And then there is another murder that wasn't suppose to be. It was a mistake. Miss Marple finally figures it out just in time to save the original intended victim. As usual I didn't pick up on the clues and did not guess who it was.

For Week 15
Posted by Sherrie