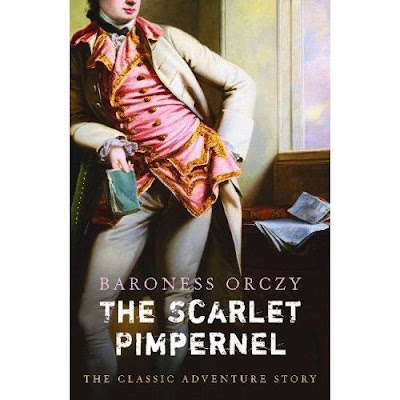 ‘The Scarlet Pimpernel’ [1913] by Baroness Orczy

‘The Scarlet Pimpernel’ opens theatrically on the ghastliness of Paris in 1792. Hundred’s of aristocrats are being arrested and guillotined every day, but somehow many escape the vengeful hoards of republicans. A group of bold Englishmen, led by a mystery man, is reputed to be behind their ingenious escapes through the gates of Paris.
Back in England, we are introduced to some of the gentlemen of this audacious band of nineteen. We are introduced too to Lady Marguerite Blakeney, a young French woman who has a shadow cast over her reputation. She is rumoured to have betrayed her friends to the guillotine and her brother is reputed to be a republican. She is married to Sir Percy Blakeney, the richest man in England who is apparently a bit of a buffoon despite his well-dressed and grand stature.
But nothing, we learn, is as it seems. The book is full of amusing irony, if you have seen through the disguises, and intrigue when you haven’t.

We seek him here, we seek him there,
Those Frenchies seek him everywhere.
Is he in heaven? – Is he in hell?
That demmed, elusive Pimpernel.
[page118]

This is a fast paced novel pausing only to enjoy sumptuous scenes of the froufrou clothing and the opulence of the aristocrats.
‘Sir Percy Blakeney’s house on the river has become an historic one: palatial in its dimensions, it stands in the midst of exquisitely laid out gardens, with a picturesque terrace and frontage to the river.’
[Page 151]
It is supposedly in Richmond overlooking the Thames near where we live and this one suits her description nicely. 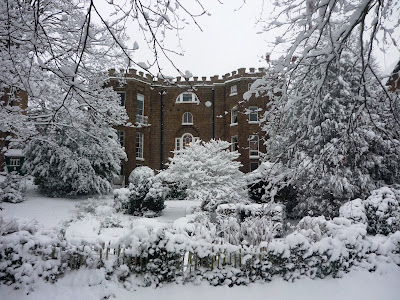 Rather like Mr Darcy in 'Pride and Prejudice', Sir Percy Blakeney has a rather smouldering aloofness and, of course, lots of money and a massive house. The action and adventure are driven by a love story - Marguerite Blakeney trying to prove to her husband that she isn't the unworthy betrayer of friends and loved ones he thinks she is.
This is a book one reads for its twists and turns and less for its observations but there is a rather wonderful, clever image of a deserted supper-room after a party which will give you a good sense of the lavish feel to the book:

‘Half-empty glasses littered the table, unfolded napkins lay about, the chairs-turned towards one another in groups of twos and threes-very close to one another-in the far corners of the room, which spoke of recent whispered flirtations, over cold game-pie and champagne; there were sets of three and four chairs, that recalled pleasant, animated discussions over the latest scandal; there were chairs straight up in a row that still looked starchy, critical, acid, like antiquated dowager; there were a few isolated, single chairs, close to the table, that spoke of gourmands intent on the most recherché dishes, and others overturned on the floor, that spoke volumes on the subject of my Lord Grenville's cellars.
It was a ghostlike replica, in fact, of that fashionable gathering upstairs; a ghost that haunts every house where balls and good suppers are given; a picture drawn with white chalk on grey cardboard, dull and colourless, now that the bright silk dresses and gorgeously embroidered coats were no longer there to fill in the foreground, and now that the candles flickered sleepily in their sockets.’
[Page 137]

I was enjoying the book enormously until a chapter near the end called ‘The Jew’. It has distressing scenes, and the language, of anti-Semitism. I had hoped this would be a wonderful book for our children to read during a study of The French Revolution and this chapter nearly killed this possibility off. However, not wishing to spoil the ending, this terrible prejudice comes back to destroy the anti-Semite in the end. As Scarlet Pimpernel says sadly:
‘I know human nature pretty well by now,’ and he uses his bitter knowledge of French anti-Semitism to trick the villain. Throughout the book Scarlet Pimpernel uses a foible of human nature known to the best magicians and tricksters. Show people what they want to believe and they will be easily fooled.
Even so, this book shouldn’t be given to a young adult without a discussion first of anti-Semitism in 19th and 20th century Europe.
‘The Scarlet Pimpernel’ is a hugely entertaining read, which, despite its dark subject matter, is lavish, funny and escapist.

Grade B (well it isn't Dickens)

I read the Hodder paperback edition [2005]


Lorna regularly posts at Socks and Books.
Posted by Ruskin