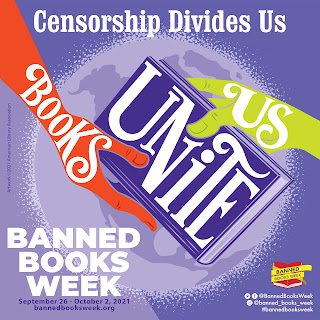 The theme for Banned Books Week this year is "Books Unite Us. Censorship Divides Us." Banned Books Week was created in 1982 by the American Library Association Office of Intellectual Freedom, in response to challenges and requests to ban books from libraries and bookstores due to their content. Poems and poetry collections, and poets have also been censored throughout history including Walt Whitman's Leaves of Grass. I have the book on my shelves, so will have to dive in to see what the fuss is all about.

According to the American Library Association the top ten most challenged books and the reasons why for the past year are:

Celebrate your freedom to read a banned or challenged book this week!

Please share your book reviews and link to your website, blog, Goodreads, Google+, Tumblers, or Instagram page. If you do not have a social media account, please leave a comment to let us know what you are reading. The link widget closes at the end of each book week.

In the Your Name field, type in your name and the name of the book in parenthesis. In the Your URL field paste a link to your post, then check the privacy box and click enter.