Today is World Book day, promoted by UNESCO and held in honor of several authors who died on this date including Miguel De Cervantes, William Shakespeare, and Inca Garcilaso de la Vega.

The Cervantes Prize, in honor of Miguel is awarded this day by the Spanish Ministry of Culture. Founded in 1976, it is the most prestigious prize to “honor the lifetime achievement of a Spanish Language writer whose contribution to the Hispanic Cultural Heritage has been decisive.”

In England, fans of William Shakespeare celebrate his life as well as St. George, the country's patron saint.

National Poetry month is winding up and Thursday, April 27th is Poem in Your Pocket day. Select a poem, carry it in your pocket, purse, book, backpack or whatever else is handy and share it with your family, friends and neighbors.

The Man Booker prize which celebrates translated fiction works from around the world announced the International Shortlist for 2017 and the nominees are: 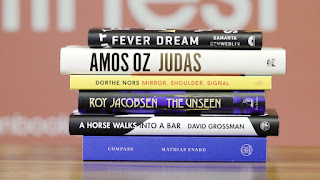 The 2017 Stella Prize, celebrates fiction or non fiction written by Australian women and has been awarded to Heather Rose for her novel The Museum of Modern Love which is available on Kindle.

Have fun following rabbit trails and share a book or two or three!