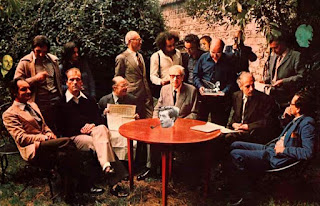 Have you ever heard of an Oulipo?  I was recently introduced to the form during one of my writing classes and found it quite intriguing.   Ouvroir de Litterature Potentielle or OULIPO was founded by French Mathematician Francois de Lionnais and writer Raymond Queneau in 1960.   Basically it is introducing a constraint while writing a poem, creating a short story, or a lipogram.

My first experiment with creating an OULIPO using Robert Frost’s The Road Not Taken was a big failure. I tried the N + 7 route which is replace the major nouns with another noun which is the 7th one below it, in the dictionary. However the first line ending up being Two robbers diverged in a women. After I stopped laughing and got over my hot flash, tried a few variations but it just wasn’t working. Then I got the bright idea to take book titles and transform them into a story, but got as far as a weird poem.

Death Comes
Brightly Burning
Across the Endless River
On the Night Road.

Dark Shadows
In the Woods
Scream for Me,
On the Night Road.

The Door Within
All Through The Night
Vanished
A World I Never Made.

Midnight
A Lethal Harvest
Watcher in the Woods
Shoot Him if He Runs.

Brilliance of the Moon
A Walk in the Woods
The Brink of Dawn
On the Night Road.

Infinite Days
The Silent Gift
Everything Beautiful Began Again.
On the Night Road.

I experimented with a serial sentences short story by  picking random books and plugging together a bunch of sentences. I gave myself a constraint. I started with ten books of varying lengths. Started with book one, chapter one, line one...book two, chapter two, line two, and so on up to line 25. Then I started over again at line one at chapter 25 and so on. I kept going until I ran out of chapters, setting aside books as ran out of chapters and continue until used up all the books. I juggled the sentences a bit in order for things to make a modicum of sense and was mostly successful. All from well known mystery authors.  Below is a shortened version because the original was 99 sentences.


The engine fired with a smooth rumble. The car remained still. The long straight highway just beyond the gas station cut across an alluvial fan that spread gracefully down the mountains to the desert floor. Score watched the deputy go to the escalade and circle his finger, silently telling the Breck woman to lower her window.

“Tell Red Hill to get the hell out of my way.” He sounded excited and definitive.

“I’m not leaving Leland.” She said.

And so had I. Two from Dorothy, confirming that she’d been able to rent all the equipment and uniforms I asked for.

“Oh man,” Jensen said. My uniform was identical, except that I was wearing a dark blue trucker cap that also said HVAC of Reston on the front. Careful he told himself. He popped the last of the fritos in his mouth.

Score looked at his schedule, swore under his breath, and wished he knew what the Breck girl was up to. Now that St. Kilda was off the board, arranging the downfall of the Clever Ms. Breck would be a pure pleasure. He sat down at his desk and fought against the kind of burp that made his eyes water.

Hastily, he said, “I’m kinda like—I like to leave that kind of stuff to others you know?”

He didn’t fancy his chances of walking away from that kind of op free, much less alive. Maybe he realized that things had changed in Washington, that the new administration didn’t want to do business with him. And just when they’re sure they’ve got it figured out, it’s over and they’ve been totally fooled.

“I want to present it to him as a complete package.”

We left our interview room—which was beginning to freak me out a little, all those round watching eyes; I told myself this was a good sign—and went into the observation chamber to see how Sam was getting on.

“No I’m better now.” She waved an oak accordion file and fought back a sneeze. She placed a folder within easy reach of the table.

“She’s had a bad f’ing day, made all the worse by the fact her own brother wasn’t there when she needed him.”


My challenge to you this week is to create an OULIPO.  It can be a N + 7, a poem created from book title, serial sentences or whatever your imagination dreams up.  Find out more about OULIPO's here, here and here.   Have fun!