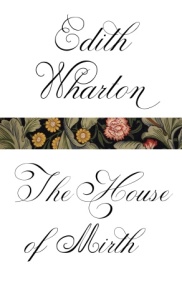 The 18th novel in Susan Wise Bauer's list of fiction reads from her book The Well-Educated Mind is The House of Mirth by Edith Wharton.  The story was published in 1905, serialized first in Scribner's Magazine.  She wrote over 40 books in 40 years and was the first woman awarded the Pulitzer prize for fiction.

SELDEN PAUSED in surprise. In the afternoon rush of the Grand Central Station his eyes had been refreshed by the sight of Miss Lily Bart. It was a Monday in early September, and he was returning to his work from a hurried dip into the country; but what was Miss Bart doing in town at that season? If she had appeared to be catching a train, he might have inferred that he had come on her in the act of transition between one and another of the country-houses which disputed her presence after the close of the Newport season; but her desultory air perplexed him. She stood apart from the crowd, letting it drift by her to the platform or the street, and wearing an air of irresolution which might, as he surmised, be the mask of a very definite purpose. It struck him at once that she was waiting for some one, but he hardly knew why the idea arrested him. There was nothing new about Lily Bart, yet he could never see her without a faint movement of interest: it was characteristic of her that she always roused speculation, that her simplest acts seemed the result of far-reaching intentions.

An impulse of curiosity made him turn out of his direct line to the door, and stroll past her. He knew that if she did not wish to be seen she would contrive to elude him; and it amused him to think of putting her skill to the test.

She came forward smiling,eager almost, in her resolve to intercept him. One or two persons, in brushing past them, lingered to look; for Miss Bart was a figure to arrest even the suburban traveller rushing to his last train.

Selden had never seen her more radiant. Her vivid head, relieved against the dull tints of the crowd, made her more conspicuous than in a ball-room, and under her dark hat and veil she regained the girlish smoothness, the purity of tint, that she was beginning to lose after eleven years of late hours and indefatigable dancing. Was it really eleven years, Selden found himself wondering, and had she indeed reached the nine-and-twentieth birthday with which her rivals credited her?

"What luck!" she repeated. "How nice of you to come to my rescue!"

He responded joyfully that to do so was his mission in life, and asked what form the rescue was to take.

"Oh, almost any--even to sitting on a bench and talking to me. One sits out a cotillion--why not sit out a train? It isn't a bit hotter here than in Mrs. Van Osburgh's conservatory--and some of the women are not a bit uglier." She broke off, laughing, to explain that she had come up to town from Tuxedo, on her way to the Gus Trenors' at Bellomont, and had missed the three-fifteen train to Rhinebeck. "And there isn't another till half-past five." She consulted the little jewelled watch among her laces. "Just two hours to wait. And I don't know what to do with myself. My maid came up this morning to do some shopping for me, and was to go on to Bellomont at one o'clock, and my aunt's house is closed, and I don't know a soul in town." She glanced plaintively about the station. "It is hotter than Mrs. Van Osburgh's, after all. If you can spare the time, do take me somewhere for a breath of air."

He declared himself entirely at her disposal: the adventure struck him as diverting. As a spectator, he had always enjoyed Lily Bart; and his course lay so far out of her orbit that it amused him to be drawn for a moment into the sudden intimacy which her proposal implied.

"Shall we go over to Sherry's for a cup of tea?"

She smiled assentingly, and then made a slight grimace. "So many people come up to town on a Monday--one is sure to meet a lot of bores. I'm as old as the hills, of course, and it ought not to make any difference; but if I'm old enough, you're not," she objected gaily. "I'm dying for tea--but isn't there a quieter place?"

He answered her smile, which rested on him vividly. Her discretions interested him almost as much as her imprudences: he was so sure that both were part of the same carefully-elaborated plan. In judging Miss Bart, he had always made use of the "argument from design."