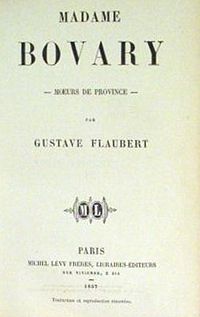 Happy Sunday.  For those of you, including me, working your way through Susan Wise Bauer's Well Educated Mind, today highlighting another book from the list of great fiction. Since we've already read # 8 Moby Dick and since # 9's Uncle Tom's Cabin verbiage is such that I don't feel comfortable posting the first chapter, I'm moving on to # 10 Madame Bovary.

Madame Bovary was Gustave's first published novel which he began writing in 1851 and worked on it for 5 years before having it published in the Paris Review in serialized form. The content was considered shocking and vulgar and Gustave, the publisher and the printer were put on trial for insulting public and religious morality. He was cleared due to the support from folks in both the political and artistic arena and the book soon became a bestseller.  The story about Emma Bovary, an unhappily married woman,  who indulges in a number of forbidden relationships in order to escape the emptiness of provincial life. Gustave is said to have been strongly inspired and influenced by French novelist Honore De Balzac’s writings.

We were in class when the head-master came in, followed by a "new fellow," not wearing the school uniform, and a school servant carrying a large desk. Those who had been asleep woke up, and every one rose as if just surprised at his work.'

The head-master made a sign to us to sit down. Then, turning to the class-master, he said to him in a low voice--'

"Monsieur Roger, here is a pupil whom I recommend to your care; he'll be in the second. If his work and conduct are satisfactory, he will go into one of the upper classes, as becomes his age."

The "new fellow," standing in the corner behind the door so that he could hardly be seen, was a country lad of about fifteen, and taller than any of us. His hair was cut square on his forehead like a village chorister's; he looked reliable, but very ill at ease. Although he was not broad-shouldered, his short school jacket of green cloth with black buttons must have been tight about the arm-holes, and showed at the opening of the cuffs red wrists accustomed to being bare. His legs, in blue stockings, looked out from beneath yellow trousers, drawn tight by braces, He wore stout, ill-cleaned, hob-nailed boots.

We began repeating the lesson. He listened with all his ears, as attentive as if at a sermon, not daring even to cross his legs or lean on his elbow; and when at two o'clock the bell rang, the master was obliged to tell him to fall into line with the rest of us.

When we came back to work, we were in the habit of throwing our caps on the ground so as to have our hands more free; we used from the door to toss them under the form, so that they hit against the wall and made a lot of dust: it was "the thing."

But, whether he had not noticed the trick, or did not dare to attempt it, the "new fellow," was still holding his cap on his knees even after prayers were over. It was one of those head-gears of composite order, in which we can find traces of the bearskin, shako, billycock hat, sealskin cap, and cotton night-cap; one of those poor things, in fine, whose dumb ugliness has depths of expression, like an imbecile's face. Oval, stiffened with whalebone, it began with three round knobs; then came in succession lozenges of velvet and rabbit-skin separated by a red band; after that a sort of bag that ended in a cardboard polygon covered with complicated braiding, from which hung, at the end of a long thin cord, small twisted gold threads in the manner of a tassel. The cap was new; its peak shone.

He stood up; his cap fell. The whole class began to laugh. He stooped to pick it up. A neighbor knocked it down again with his elbow; he picked it up once more.

"Get rid of your helmet," said the master, who was a bit of a wag.

There was a burst of laughter from the boys, which so thoroughly put the poor lad out of countenance that he did not know whether to keep his cap in his hand, leave it on the ground, or put it on his head. He sat down again and placed it on his knee.

"Rise," repeated the master, "and tell me your name."

The new boy articulated in a stammering voice an unintelligible name.

The same sputtering of syllables was heard, drowned by the tittering of the class.

The "new fellow" then took a supreme resolution, opened an inordinately large mouth, and shouted at the top of his voice as if calling someone in the word "Charbovari."

A hubbub broke out, rose in crescendo with bursts of shrill voices (they yelled, barked, stamped, repeated "Charbovari! Charbovari"), then died away into single notes, growing quieter only with great difficulty, and now and again suddenly recommencing along the line of a form whence rose here and there, like a damp cracker going off, a stifled laugh.

However, amid a rain of impositions, order was gradually re-established in the class; and the master having succeeded in catching the name of "Charles Bovary," having had it dictated to him, spelt out, and re-read, at once ordered the poor devil to go and sit down on the punishment form at the foot of the master's desk. He got up, but before going hesitated.

"What are you looking for?" asked the master.

"My c-a-p," timidly said the "new fellow," casting troubled looks round him.

"Five hundred lines for all the class!" shouted in a furious voice stopped, like the Quos ego (A quotation from the Aeneid signifying a threat, a fresh outburst. "Silence!" continued the master indignantly, wiping his brow with his handkerchief, which he had just taken from his cap. "As to you, 'new boy,' you will conjugate 'ridiculous sum' twenty times."'  Then, in a gentler tone, "Come, you'll find your cap again; it hasn't been stolen."

Quiet was restored. Heads bent over desks, and the "new fellow" remained for two hours in an exemplary attitude, although from time to time some paper pellet flipped from the tip of a pen came bang in his face. But he wiped his face with one hand and continued motionless, his eyes lowered.

In the evening, at preparation, he pulled out his pens from his desk, arranged his small belongings, and carefully ruled his paper. We saw him working conscientiously, looking up every word in the dictionary, and taking the greatest pains. Thanks, no doubt, to the willingness he showed, he had not to go down to the class below. But though he knew his rules passably, he had little finish in composition. It was the cure of his village who had taught him his first Latin; his parents, from motives of economy, having sent him to school as late as possible.....


Continue reading Chapter 1 and the rest of the story here or here and for more background on Gustave click here.

Between the folks voting on Well Trained Mind forums and comments here,  The Boy From Reactor 4 received the most votes and the other three books all tied for 2nd.