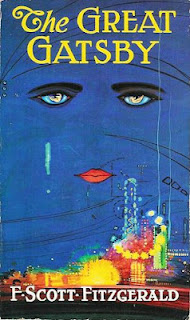 Back cover synopsis:   The Great Gatsby, F. Scott Fitzgerald’s third book, stands as the supreme achievement of his career. This exemplary novel of the Jazz Age has been acclaimed by generations of readers. The story of the fabulously wealthy Jay Gatsby and his love for the beautiful Daisy Buchanan, of lavish parties on Long Island at a time when The New York Times noted “gin was the national drink and sex the national obsession,” it is an exquisitely crafted tale of America in the 1920s.

Well... I failed in my quest to read The Great Gatsby last week because it had become buried in my very full shelves and I had to do a bit of searching before I found it.  I started reading it Saturday morning and let's say it's more intriguing than The Brothers Karamazov and fortunately much shorter.

The Great Gatsby was published in 1925 and many of the events are taking directly from F.Scott Fitzgerald's life.  According to sparknotes:

"Written in 1925, The Great Gatsby is one of the greatest literary documents of this period, in which the American economy soared, bringing unprecedented levels of prosperity to the nation. Prohibition, the ban on the sale and consumption of alcohol mandated by the Eighteenth Amendment to the Constitution (1919), made millionaires out of bootleggers, and an underground culture of revelry sprang up. Sprawling private parties managed to elude police notice, and “speakeasies”—secret clubs that sold liquor—thrived. The chaos and violence of World War I left America in a state of shock, and the generation that fought the war turned to wild and extravagant living to compensate. The staid conservatism and timeworn values of the previous decade were turned on their ear, as money, opulence, and exuberance became the order of the day.

Like Nick in The Great Gatsby, Fitzgerald found this new lifestyle seductive and exciting, and, like Gatsby, he had always idolized the very rich. Now he found himself in an era in which unrestrained materialism set the tone of society, particularly in the large cities of the East. Even so, like Nick, Fitzgerald saw through the glitter of the Jazz Age to the moral emptiness and hypocrisy beneath, and part of him longed for this absent moral center. In many ways, The Great Gatsby represents Fitzgerald’s attempt to confront his conflicting feelings about the Jazz Age. Like Gatsby, Fitzgerald was driven by his love for a woman who symbolized everything he wanted, even as she led him toward everything he despised.

The Great Gatsby may be found online here and here.  To whet your taste buds a bit below is an excerpt from Chapter one:

In my younger and more vulnerable years my father gave me some advice that I’ve been turning over in my mind ever since.

“Whenever you feel like criticizing any one,” he told me, “just remember that all the people in this world haven’t had the advantages that you’ve had.”

He didn’t say any more, but we’ve always been unusually communicative in a reserved way, and I understood that he meant a great deal more than that. In consequence, I’m inclined to reserve all judgments, a habit that has opened up many curious natures to me and also made me the victim of not a few veteran bores. The abnormal mind is quick to detect and attach itself to this quality when it appears in a normal person, and so it came about that in college I was unjustly accused of being a politician, because I was privy to the secret griefs of wild, unknown men. Most of the confidences were unsought — frequently I have feigned sleep, preoccupation, or a hostile levity when I realized by some unmistakable sign that an intimate revelation was quivering on the horizon; for the intimate revelations of young men, or at least the terms in which they express them, are usually plagiaristic and marred by obvious suppressions. Reserving judgments is a matter of infinite hope. I am still a little afraid of missing something if I forget that, as my father snobbishly suggested, and I snobbishly repeat, a sense of the fundamental decencies is parcelled out unequally at birth.

And, after boasting this way of my tolerance, I come to the admission that it has a limit. Conduct may be founded on the hard rock or the wet marshes, but after a certain point I don’t care what it’s founded on. When I came back from the East last autumn I felt that I wanted the world to be in uniform and at a sort of moral attention forever; I wanted no more riotous excursions with privileged glimpses into the human heart. Only Gatsby, the man who gives his name to this book, was exempt from my reaction — Gatsby, who represented everything for which I have an unaffected scorn. If personality is an unbroken series of successful gestures, then there was something gorgeous about him, some heightened sensitivity to the promises of life, as if he were related to one of those intricate machines that register earthquakes ten thousand miles away. This responsiveness had nothing to do with that flabby impressionability which is dignified under the name of the “creative temperament.”— it was an extraordinary gift for hope, a romantic readiness such as I have never found in any other person and which it is not likely I shall ever find again. No — Gatsby turned out all right at the end; it is what preyed on Gatsby, what foul dust floated in the wake of his dreams that temporarily closed out my interest in the abortive sorrows and short-winded elations of men.....


Besides writing The Great Gatsby and several short stories, F. Scott Fitzgerald also wrote the novels This Side of Paradise, Tender is the Night and The Beautiful and the Damned.  He died while writing The Love of the Last Tycoon which was finished by his friend Edmund Wilson and published in 1941.

If you have multiple reviews, then type in (multi) after your name and link to your general blog url.