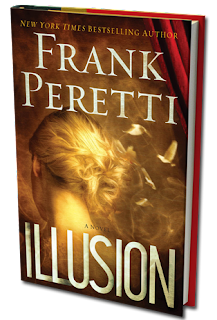 One of my favorite authors is finally releasing another book after a long six year wait.  Frank Peretti who wrote This Present Darkness and Piercing the Darkness, two ultra scary, chilling, spine tingling books about spiritual warfare has written Illusion which will be released March 6th.

Synopsis:   Dane and Mandy, a popular magic act for forty years, are tragically separated by a car wreck that claims Mandy’s life—or so everyone thinks. Even as Dane mourns and tries to rebuild his life without her, Mandy, supposedly dead, awakes in the present as the nineteen-year-old she was in 1970. Distraught and disoriented in what to her is the future, she is confined to a mental ward until she discovers a magical ability to pass invisibly through time and space to escape. Alone in a strange world, she uses her mysterious powers to eke out a living, performing magic on the streets and in a quaint coffee shop.

Hoping to discover an exciting new talent, Dane ventures into the coffee shop and is transfixed by the magic he sees, illusions that even he, a seasoned professional, cannot explain. But more than anything, he is emotionally devastated by this teenager who has never met him, doesn’t know him, is certainly not in love with him, but is in every respect identical to the young beauty he first met and married some forty years earlier.

They begin a furtive relationship as mentor and protegee, but even as Dane tries to sort out who she really is and she tries to understand why she is drawn to him, they are watched by secretive interests who not only possess the answers to Mandy’s powers and misplacement in time but also the roguish ability to decide what will become of her.

I discovered Frank Peretti back in the 1986 with the release of  "This Present Darkness" about evil trying to take over a small town and the battle not only with humans but angels and demons for their souls.  It's a gripping tale that will literally give you goosebumps as angels fighting amongst the humans with demons sitting on someone's shoulder whispering in their ears.

"Ashton is just a typical small town. But when a skeptical reporter and a pastor begin to compare notes, they suddenly find themselves fighting a hideous plot to subjugate the townspeople—and eventually the entire human race. A riveting thriller, This Present Darkness offers a fascinating glimpse into the unseen world of spiritual warfare.When the fictional town of Ashton runs up against the sinister Omni Corporation, all hell breaks through - literally."

Peretti followed up in 1989 with the Piercing the Darkness:

"This sequel to Peretti's This Present Darkness is built upon fundamentalist Christian ideas. As it tells the story of Sally Roe, who goes from spiritualism to conversion, it also traces a battle to save a Christian school from demon-inspired litigation. The human activities are again overshadowed by the battle between angels and demons, whom the author takes quite literally, giving them names, personalities, and dialogue. They influence all human activities, just as human prayer helps angels and hampers demons."

"A thriller that penetrates to the very heart of a vast struggle that threatens to tear our society apart. Successful news anchorman John Barrett is caught in a suspenseful moral and spiritual battle over the importance of Truth. Using all the elements of edge-of-your-seat fiction, master storyteller Frank Peretti weaves a prophetic tale of our times. John Barrett, top news anchor for Channel 6, knows something is wrong. The story doesn't add up. It couldn't have happened that way, and Barrett is determined to find the truth. Was his father's death really an accident? Or did he know too much? Another spine-tingling tale of deception, murder, and redemption."

"An ancient sin. A long forgotten oath. A town with a deadly secret.Something evil is at work in Hyde River, an isolated mining town in the mountains of the Pacific Northwest.
Under the cover of darkness, a predator strikes without warning-taking life in the most chilling and savage fashion. The community of Hyde River watches in terror as residents suddenly vanish. Yet, the more locals are pressed for information, the more they close ranks, sworn to secrecy by their forefathers' hidden sins.

Only when Hyde River's secrets are exposed is the true extent of the danger fully revealed. What the town discovers is something far more deadly than anything they'd imagined. Something that doesn't just stalk its victims, but has the power to turn hearts black with decay as it slowly fills their souls with darkness."

"The sleepy, eastern Washington wheat town of Antioch has become a gateway for the supernatural-from sightings of angels and a weeping crucifix to a self-proclaimed prophet with an astounding message.
The national media and the curious all flock to the little town-a great boon for local business but not for Travis Jordan. The burned-out former pastor has been trying to hide his past in Antioch. Now the whole world is headed to his backyard to find the Messiah, and in the process, every spiritual assumption he has ever held will be challenged. The startling secret behind this visitation ultimately pushes one man into a supernatural confrontation that has eternal consequences."

"Some monsters are real. Miles away from the hectic city, Reed and Rebecca hike into the beautiful Northwester woods. They are surrounded by gorgeous mountains, waterfalls, and hundreds of acres of unspoiled wilderness.During their first night camping, an unearthly wail pierces the calm of the forest. Then something emerges from the dense woods. Everything that follows is a blur to Reed-except the unforgettable image of a huge creature carrying his wife into the darkness.  Enter into deep wilderness where the rules of civilization no longer apply. A world where strange shadows lurk. Where creatures long attributed to overactive imaginations and nightmares are the hunters . . .and people are the hunted."

"Frank Peretti and Ted Dekker-two of the most acclaimed writers of supernatural thrillers-have joined forces for the first time to craft a story unlike any you've ever read. Enter House-where you'll find yourself thrown into a killer's deadly game in which the only way to win is to lose . . . and the only way out is in. The stakes of the game become clear when a tin can is tossed into the house with rules scrawled on it. Rules that only a madman-or worse-could have written. Rules that make no sense yet must be followed.
One game. Seven players. Three rules. Game ends at dawn."