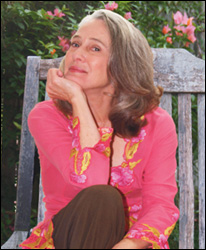 A couple years back I discovered Nevada Barr's Anna Pigeon mystery series when I read "Blind Descent" and was delightfully pulled into the mysterious world of spelunking and murder.  Her writing puts you right there with Anna as she battles claustrophobia to go save an injured friend.

Amazon:  "Feisty, resourceful forest ranger Anna Pigeon faced everything from raging fires to deep-water dives with cool aplomb in her first five adventures. Very early in Blind Descent her courage is put to an even greater test when she learns that a woman seriously injured while exploring a cave next door to New Mexico's Carlsbad Caverns is a friend who has requested Pigeon's help in getting her out. "A chilling image filled Anna's mind: herself crouched and whimpering, fear pouring like poison through her limbs, shutting down her brain as the cave closed in around her." Pushing aside her fears, Pigeon takes the plunge, leading readers through a truly harrowing series of tight squeezes...."

I dipped my toes into Anna's life again with "Winter Study" as she battles both nature and man in the frozen winter of  Isle Royale National Park.  You could practically feel your toes freezing off as you read the story.

Publisher's Weekly: "In bestseller Barr's chilling 14th mystery thriller to feature National Park Service ranger Anna Pigeon (after 2005's Hard Truth), Anna joins the team of Winter Study, a research project intended to study the wolves and moose of Michigan's Isle Royale National Park, the setting for 1994's A Superior Death. Complicating the study is Bob Menechinn, an untrustworthy Homeland Security officer assigned to shadow the research. Crowded into inhospitable lodgings and persecuted by unrelenting cold, Anna is far from her comfort zone as nature turns awry with a series of bizarre events. The team stumbles upon the tracks—and the mutilated victim—of a preternaturally large, unidentified beast, and local packs of wolves descend on human-populated areas, a behavior out of step with their species. The campfire legends of youth metastasize into adult fears as Anna must piece together a connection between these anomalies while guarding herself from the strangers around her. Barr's visceral descriptions of the winter cold nicely complement the paranoia that follows the appearance of the mythic monsters at play.

There are 16 books in the series and easily read as stand alones.   Barr just released the 17th book "The Rope" which takes you back to the beginning of Anna's story.

Amazon:  "In The Rope, the latest in Nevada Barr’s bestselling novels featuring Anna Pigeon, Nevada Barr gathers together the many strings of Anna’s past and finally reveals the story that her many fans have been long asking for. In 1995 and 35 years old, fresh off the bus from New York City and nursing a broken heart, Anna Pigeon takes a decidedly unglamorous job as a seasonal employee of the Glen Canyon National Recreational Area. On her day off, Anna goes hiking into the park never to return. Her co-workers think she’s simply moved on—her cabin is cleaned out and her things gone. But Anna herself wakes up, trapped at the bottom of a dry natural well, naked, without supplies and no clear memory of how she found herself in this situation.
As she slowly pieces together her memory, it soon becomes clear that someone has trapped her there, in an inescapable prison, and no one knows that she is even missing. Plunged into a landscape and a plot she is unfit and untrained to handle, Anna Pigeon must muster the courage, determination and will to live that she didn’t even know she still possessed to survive, outwit and triumph.