Mix together a book shop, haunt it with a disembodied spirit of a private eye, and you have the makings of an interesting mystery series.   Alice Kimberly aka Cleo Coyle of the Coffee House Mysteries has come up with a wonderful cozy mystery series that is quite entertaining.  I read the first book in the series and will be going back for more and reading the rest of the books in the series. I'm a series junkie.
The Haunted Bookshop Mysteries

After her husband’s suicide, young widow Penelope Thornton-McClure moves herself and her young son from New York City back to her little seaside New England hometown of Quindicott, Rhode Island. When she arrives, however, she finds her aunt Sadie Thornton in financial trouble and about to lose the family's old bookshop.

Unwilling to allow the business to fail, Pen cashes her late husband’s life insurance money and uses every penny to overhaul the inventory and remodel the place. As fate would have it, the construction rouses the spirit of a dead man, a private investigator from New York who’d been gunned down on the premises in 1949 while investigating a murder.
Waking from a half-century of slumber, the hard-boiled ghost is less than thrilled to find himself cosmically imprisoned within the fieldstone walls of Pen’s bookstore...
Jack
Shepard, PI
In life, Jack's pulse pounded to the rhythm of the city streets: the smoky dice joints and swingin’ suds clubs. Why couldn’t he have been gunned down in a joint like that? Instead, he got lead poisoning in the god-forsaken sticks, eternity in cornpone alley. There's only one thing that makes this backwater existence tolerable. Her name is Penelope...
Okay, so the broad is one of those annoying do-right, fair-play Jane types, but she has a nice face, a sweet voice, and Jack always had been a sucker for redheads. If he hears her thoughts right, Penelope doesn't even believe in ghosts. Well, he never believed in them, either. But, brother, had he been wrong.
Now he's a disembodied spirit, sentenced for his sins to exist in a world he hardly knows. Lucky for him his purgatory comes with an auburn haired angel, a doll named Penelope he can't stop watching or watching over... 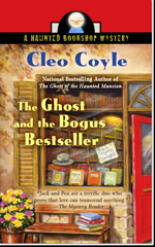 If you don't have a blog, tell us about the books you are reading in the comment section of this post.
Posted by Robin M