All eyes were on England Friday for the wedding of Prince William and Kate Middleton.  One of the first questions my hubby asked:  What is their last name?  Good question.  I always thought since it was called Windsor Castle, their last name was Windsor.  I was half right.  On the official website of The British Monarchy (fascinating website - check it out)  I discovered this:

The Royal Family name of Windsor was confirmed by The Queen after her accession in 1952. However, in 1960, The Queen and The Duke of Edinburgh decided that they would like their own direct descendants to be distinguished from the rest of the Royal Family (without changing the name of the Royal House), as Windsor is the surname used by all the male and unmarried female descendants of George V.

It was therefore declared in the Privy Council that The Queen's descendants, other than those with the style of Royal Highness and the title of Prince/Princess, or female descendants who marry, would carry the name of Mountbatten-Windsor.

This reflected Prince Philip's surname. In 1947, when Prince Philip of Greece became naturalised, he assumed the name of Philip Mountbatten as a Lieutenant in the Royal Navy.

The effect of the declaration was that all The Queen's children, on occasions when they needed a surname, would have the surname Mountbatten-Windsor.

And with the marriage of Prince William and Kate Middleton, the queen has announced:

The Queen has today been pleased to confer a Dukedom on Prince William of Wales. His titles will be Duke of Cambridge, Earl of Strathearn and Baron Carrickfergus.

Congratulations to the Duke and Duchess of Cambridge. May their marriage be as blessed as his grandparents. 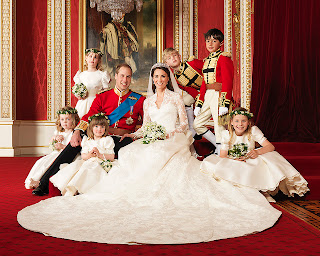