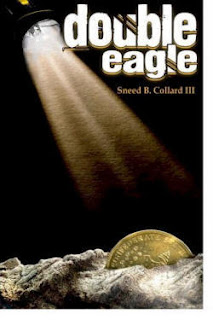 I recently read and reviewed  Double Eagle by Sneed B Collard III which I thoroughly enjoyed. Admittedly as a home school mom, I am always on the look out for great books, fiction and non fiction to read and teach James.  Imagine my delight when I discovered Sneed has also written many non fiction books about science, nature, American heroes and more.  I've already added a few to our science reading list for next year.  As a biologist and author, Sneed's travels had taken him all over the world as well as down to the bottom of the sea.
Today, I am thrilled to welcome Sneed as a guest to My Two Blessings and Read 52 Books in 52 Weeks to talk about Double Eagle and researching the civil war.
Hi Everyone!
First of all, I’d like to thank Robin for the great review of my novel Double Eagle—and all of you who shared positive responses about it. I have to admit I had a blast writing this book. Like any kid-at-heart, the idea of finding hidden treasure proved an irresistible writing inspiration. I also loved learning more about the relatively unknown topic of the Union blockade of Southern ports during the Civil War.
I researched Double Eagle by doing tons of reading, but also by taking my family to Dauphin Island, Alabama for an entire month. My research reinforced my appreciation for the courage of rank-and-file soldiers on both sides of the Civil War. It also revealed the corruption of many of the more powerful players.
Take the blockade runners. The South relied on these low-profile, fast ships both to smuggle out its cotton, and to smuggle in weapons, medicines, and other materials. To succeed in this task, blockade runners had to sneak past or outrun a phalanx of Union gunships into ports such as Mobile. Although undoubtedly brave, the blockade runners were driven as much by dollars as by a sense of patriotism. The ships and crews were financed primarily by British speculators looking to make a profit—and this profit could be immense. Blockade runners didn’t just carry necessities, as people often presume. They carried large supplies of liquor and other luxury goods for wealthy Southerners as well. If I remember correctly, one successful ‘run’ of supplies earned enough money to build three or four other smuggling ships.
Confederate commanders were not immune to getting their share, either. While talking over plot ideas with the resident historian at Fort Gaines, Alabama (Fort Henry in Double Eagle), we were discussing why there were more cannons at Fort Morgan across the bay than on our side at Fort Gaines. The historian mentioned that apparently, the Confederate commander of Mobile Bay was getting huge kickbacks on each successful blockade run. Fort Morgan’s cannons not only protected Mobile Bay, they guarded the favored route of the blockade runners into and out of the bay—and the commander’s profits.
For those who’d like to learn more about the blockade runners, I highly recommend Blockade Runners of the Confederacy by Hamilton Cochran. If there’s any lesson in exploring these stories, we have not progressed as much as we’d like to think in the last 150 years. From World War II to our current wars in Iraq and Afghanistan, corruption has not only siphoned off billions in taxpayer dollars, it has robbed soldiers of the equipment and supplies they need to do their jobs as safely as possible. It’s only one aspect of war that makes me seriously question just who benefits from these bloody, costly struggles—and whether or not rushing off to battle really is the most patriotic solution to international conflict.
Posted by Robin M