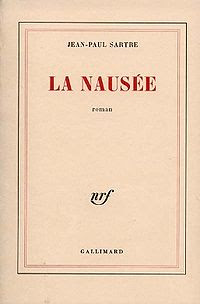 Wonderful title for a book isn't it?   Le Nausee by Jean Paul Sartre or in English Nausea.  He is a french existentialism philosopher and won the Nobel Peace prize for literature in 1964.  He actually declined to accept the prize for personal reason, but it didn't not change the fact that he had won.  Nausea will be the first book I will be reading this week for my Nobel Literature class I'm currently taking.

I just started my Nobel Literature class and finding it very interesting.   Yes, it's going to be a lot of work but looking forward to reading several books that I probably normally wouldn't have considered reading.  This week I've been reading all about the history behind the Nobel Peace prize for literature at Nobelprize.org.  Quite an interesting site and well worth perusing when you have the time.  I'll be going back and checking out the information on the rest of the Nobel prizes categories.
Alfred Nobel was Swedish and when he died, he requested the bulk of his fortune be used to establish a prize which would be divided in 5 equal parts.
Excerpt from his will:

"The whole of my remaining realizable estate shall be dealt with in the following way: the capital, invested in safe securities by my executors, shall constitute a fund, the interest on which shall be annually distributed in the form of prizes to those who, during the preceding year, shall have conferred the greatest benefit on mankind. The said interest shall be divided into five equal parts, which shall be apportioned as follows:

one part to the person who shall have made the most important discovery or invention within the field of physics;

one part to the person who shall have made the most important chemical discovery or improvement;

one part to the person who shall have made the most important discovery within the domain of physiology or medicine;

one part to the person who shall have produced in the field of literature the most outstanding work in an ideal direction;

and one part to the person who shall have done the most or the best work for fraternity between nations, for the abolition or reduction of standing armies and for the holding and promotion of peace congresses.

The prizes for physics and chemistry shall be awarded by the Swedish Academy of Sciences; that for physiology or medical works by the Karolinska Institute in Stockholm; that for literature by the Academy in Stockholm, and that for champions of peace by a committee of five persons to be elected by the Norwegian Storting. It is my express wish that in awarding the prizes no consideration be given to the nationality of the candidates, but that the most worthy shall receive the prize, whether he be Scandinavian or not."

He also specified who would be responsible for selecting the noble laureates and for literature, the responsibility was given to the Swedish Academy.  A big question has always been how does one  get nominated.   Well, an author cannot nominate himself.   He must be nominated by what the Academy considers a qualified person.  Who is qualified?
Then the academy gleans through the candidates, eventually narrows down the nominations to a select few, reads their works and decides whom will win the prize.   The members of the Academy don't always agree and it seems there have been some controversial and what some consider politically motivated awards handed out to writers.  Plus there has been controversy regarding some of the authors who haven't won, whom some considered better qualified.  And then you have some authors who didn't want to accept the prize because they considered it the death of their career.
And you have a group of 18 people who are interpreting Nobel's words "the person who shall have produced in the field of literature the most outstanding work in an ideal direction."   It depends entirely on their definition of ideal.   The members of the academy are a diverse group of historian, literary linguists and historians.
My main thought while reading all this was where did the money come from. Was Alfred Nobel independently wealthy, did he inherit the money himself, where did all this money come from that is being used to fund the prize?   Long story short, in 1867 he invented Dynamite.  He had factories and laboratories in over 90 places in 20 different countries.  He had initially created dynamite to be used for mining and because it ended up being used for purposes he never intended, he created the Nobel Prize.
The Nobel Prize Winners in Literature
I'll be reading 4 more books by Nobel Prize winning authors during this class including the four  I mentioned previously:
Nausea by Jean Paul Sartre -  1964 prize  (french) He actually declined the award for fear it would impact his writing.
Magic Mountain by Thomas Mann -  1929 prize  (German) Even though in his acceptance speech he said writers were non orators, he was quite eloquent.
One Hundred Years of Solitude by Gabriel Garcia Marquez - 1982 prize Literary Fiction set in a mythical Latin American town.  The committee likened him to William Faulkner
The Silent Cry by Kenzaburo Oe - 1994 prize Japanese literature.  According to the committee "Your books offer, indeed, such a "model", enabling us to see the interaction of time present and time past, of relentless change and persistent myth, and to distinguish man's delicate position in the context."


The four other books I had to choose from different regions of the country and two must be a novel, one of poetry and one of Drama.  For novels I will be reading a novel by Ernest Hemingway (1954 prize) United States region.   I've been wanting to read "The Old Man and The Sea" but have never quite gotten around to it. From Turkey,  Orhan Pamuk. (2006 Prize)  I'm still trying to decide which one of his I want to read. I'm considering "the House of Silence (if I can find it), "The White Castle," or  "The New Life."

From Latin America, I will be reading the poetry of Gabriela Mistral (1945 Prize) and from Europe a drama by Samuel Beckett (1969 prize). I'm debating between "Waiting for Godot" and "Krapp's Last Tape.

Reading, analyzing and discussing eight books in fifteen weeks will most likely keep me very busy. And most likely will start me on a new path to reading all the Nobel authors over a period of time.