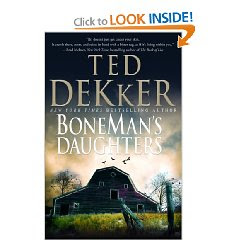 Front Flap: "Would you kill an innocent man to save your daughter?"

They call him BoneMan, a serial killer who's abducted six young women. He's the perfect father looking for the perfect daughter, and when his victims fail to meet his lofty expectations, he kills them by breaking their bones and leaving them to die. Intelligence officer Ryan Evans, on the other hand, has lost all hope of ever being the perfect father. His daughter and wife have written him out of their lives.

Everything changes when BoneMan takes Ryan's estranged daughter, Bethany, as his seventh victim. Ryan goes after BoneMan on his own. But the FBI see it differently. New evidence points to the suspicios that Ryan is BoneMan. Now the hunter is the hunted, and in the end, only one father will stand."

As everyone knows, Ted Dekker is one of my favorite writers. His thrillers are all well writen, unique and some can be very chilling and creepy. His books generally evoke a personal response, make you think. "BoneMan's Daughter" had me cringing and gritting my teeth throughout. It is rather violent, gruesome, and dark. I didn't like the decisions made by the characters and I really, really, really hated the ending. Yes, the story is well written and I would recommend Ted Dekker to those who like thrillers. Just be warned - this one is graphic and creepy.

Amy of My Friend Amy:
"I sort of enjoyed BoneMan's Daughters as well, but it's a pretty gruesome read. I can't say that it's my favorite of his books. I do enjoy suspense books centered around serial killers, but I got really queasy reading this one!"

Luanne of A Bookworms World:
"On one level this is simply a story of a father fighting for his daughter's love and life. And on that level, it's a heck of a good tale, keeping me turning pages late into the night. It's a well written, suspenseful thriller, with a great twist at the end.

But in a bigger sense, BoneMan is a battle between good and evil. It is also a story of needing to be wanted, needing the love of a parent. For even though the BoneMan is disturbing, despicable and horrendous in his actions, the impetus for his actions is the desire to be loved."

Jennifer of The Literate Housewife Review:
"This novel was more than just a good read. It is a story the reader experiences through almost every sense. I saw the words upon the page, felt the Boneman’s cool and smooth, smelled the ever present scent of Noxema, and heard the popping sound of breaking bones. Having almost my entire body engaged in a novel added to the suspense and the thrill."
Posted by Robin M

Email ThisBlogThis!Share to TwitterShare to FacebookShare to Pinterest
Labels: 2009 52 books in 52 weeks, Mysteries