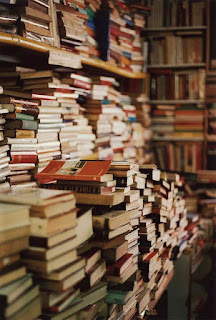 It is time for another round of bookish notes and birthdays.

Congratulations to  Kazuo Ishiguro, the 2017 winner of the Nobel Prize for Literature.  The secretary of the Swedish academy "described Kazuo Ishiguro's writing style as a mix of Jane Austen and Franz Kafka: 'But you have to add a little bit of Marcel Proust into the mix, and then you stir.'"  Ishiguro has been awarded the prize as one "who, in novels of great emotional force, has uncovered the abyss beneath our illusory sense of connection with the world."  Check out Literary Saloon's round up of articles discussing Ishiguro.

Neil Gaiman's Good Omens will be coming to screens in the near future with David Tennant and  Michael Sheen, playing the demon and the angel.   Plus Gaiman's All Hallows Read will be repeated this year the week of Halloween with some scary but not too scary book suggestions for kids to teens.

Check out 8 Stellar Nonfiction Reads for World space week which runs from October 4th through the 10th.

Moving on to the not so spooky with The Irish Times article: Mrs Osmond by John Banville: An entertaining homage to Henry James.