I am currently reading Dorothy Dunnett's  historical fiction novel Niccolo Rising set in the mid 15th Century.  It is well written and is one of those hard to put down, forget what time it is, and stay up way past your bedtime reads.

Dorothy was born August 25, 1923 and grew up in Edinburgh.  She discovered writing at the age of 38 and during her lifetime, wrote twenty two books and helped compile two companion books detailing the historical events and characters in her books.

She started writing The Game of Kings, the first book in the Lymond Chronicles, in the late 50's.  After being rejected by British publishers, she had it published in America.  Her husband, Alistair, asked Lois Dwight Cole, the American editor of Gone With the Wind if she'd read the manuscript. Immediately upon reading the book, she offered Dunnett a writing contract.

Dunnett went on to write 6 books in the Lymond Chronicles series:

Upon finishing the Lymond series, her publisher requested she write a standalone novel about a major historical figure.  She went on to write King Hereafter, the story of the real Macbeth (not Shakespeare's version) with the premise Macbeth was Thorfinn, the Earl of Orkney.

Not satisfied with writing stand alone novels, she went on to write the 8 books series called The House of Niccolo:

Meanwhile, while writing both the Chronicles and the Niccolo series, she also wrote a detective series called the Dolly series,,also known as the Johnson Johnson series which were published under her maiden name, then later republished and renamed.   The series was reprinted in 2012 and all are available on Kindle.

Dorothy died at the age of 78 on November 9th, 2001 after a short illness. The Dorothy Dunnett Society had a memorial stone created in her honor in 2006 and placed near the entrance to the Scottish Writer's Museum. 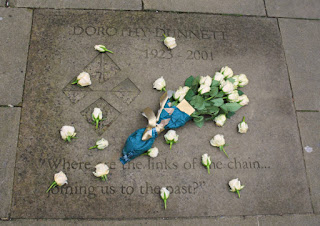 Join me in reading one or more of Dorothy Dunnett's novels.