We're just a day off as his birthday is November 10.   This man is one year younger than me and has accomplished so much in his lifetime.  He is multifaceted writer.  My introduction to him was his book The Graveyard Book  a couple years ago.


I enjoyed it, even though it was weird and quirky. The story begins with a man named Jack walking through a home, killing first the parents, then bod's brother. Bod, even though a toddler, somehow manages to climb out of his crib and wander out the open door, while Jack kills his family. The killings are not graphically depicted but implied. The writing is very well done and paints a picture


Bod wanders up and into a graveyard where the ghosts and other denizens of the place decide to protect him. Of course, they have to put it to a vote first.


"A graveyard is not normally a democracy, and yet death is the great democracy, and each of the dead had a voice, and an opinion as to whether the living child should be allowed to stay, and they were each determined to be heard that night." pg 29


Bod is raised by the ghosts and Silas, who neither dead or alive, protects him and makes sure his physical needs for food and dress are taken care of. Bod gets an interesting education in history and thought from various ghosts from the different eras as well as lessons in slipping through shadow and fading from awareness, "the ways of the dead".


Throughout the story, Jack never ceases to look for Bod and finish the job he started. The villains (the Jacks of all Trades) reasons in the story for killing bod's family and him are a bit vague and I'll leave the mystery of what happened to your imaginations.

I thoroughly enjoyed The Graveyard Book and recently read Anansi Boys which was well written and just as unique as the other book. 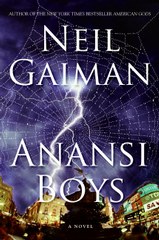 When Fat Charlie's dad named something, it stuck. Like calling Fat Charlie "Fat Charlie." Even now, twenty years later, Charlie Nancy can't shake that name, one of the many embarrassing "gifts" his father bestowed -- before he dropped dead on a karaoke stage and ruined Fat Charlie's life.


Mr. Nancy left Fat Charlie things. Things like the tall, good-looking stranger who appears on Charlie's doorstep, who appears to be the brother he never knew. A brother as different from Charlie as night is from day, a brother who's going to show Charlie how to lighten up and have a little fun ... just like Dear Old Dad. And all of a sudden, life starts getting very interesting for Fat Charlie.
Because, you see, Charlie's dad wasn't just any dad. He was Anansi, a trickster god, the spider-god. Anansi is the spirit of rebellion, able to overturn the social order, create wealth out of thin air, and baffle the devil. Some said he could cheat even Death himself.


Neil Gaiman. His books are intriguing, imaginative and entertaining. In honor of his birthday, check out one of his books this month.