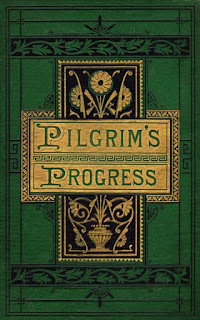 The 2nd novel in Susan Wise Bauer's Well Educated Mind list of fiction reads is the allegory  The Pilgrim's Progress by John Bunyan. He wrote the story in two parts:  the first published in 1678 and the second in 1684.  It was finally combined into one volume in 1728.   The first part is about a man named Christian who carries a heavy burden and in order to rid himself of that burden, decides to travel to the celestial city.  His journey takes him through valley of the shadow of death, vanity fair, the slough of despond and delectable mountain.  The 2nd part is about his wife and children who follow his path a few years later.

"As I walked through the wilderness of this world, I lighted on a certain place, where was a den; and I laid me down in that place to sleep: and as I slept I dreamed a dream.  I dreamed, and behold I saw a man clothed with rags, standing in a certain place, with his face from his own house, a book in his hand, and a great burden upon his back.  I looked, and saw him open the book, and read therein; and as he read, he wept and trembled: and not being able longer to contain, he brake out with a lamentable cry; saying, 'What shall I do?'

In this plight, therefore, he went home, and restrained himself as long as he could, that his wife and children should not perceive his distress; but he could not be silent long, because that his trouble increased. Wherefore at length he brake his mind to his wife and children; and thus he began to talk to them: "O, my dear wife," said he, "and you the children of my bowels, I, your dear friend, am in myself undone by reason of a burden that lieth hard upon me; moreover, I am certainly informed that this our city will be burnt with fire from heaven; in which fearful overthrow, both myself, with thee my wife, and you my sweet babes, shall miserably come to ruin, except (the which yet I see not) some way of escape can be found whereby we may be delivered."

At this his relations were sore amazed; not for that they believed that what he had said to them was true, but because they thought that some frenzy distemper had got into his head; therefore, it drawing towards night, and they hoping that sleep might settle his brains, with all haste they got him to bed. But the night was as troublesome to him as the day; wherefore, instead of sleeping, he spent it in sighs and tears. So when the morning was come, they would know how he did. He told them, "Worse and worse:" he also set to talking to them again; but they began to be hardened. They also thought to drive away his distemper by harsh and surly carriage to him; sometimes they would deride, sometimes they would chide, and sometimes they would quite neglect him. Wherefore he began to retire himself to his chamber to pray for and pity them, and also to condole his own misery; he would also walk solitarily in the fields, sometimes reading, and sometimes praying: and thus for some days he spent his time."


The story is available online in numerous places including here as well as in audiobook form.  My challenge to you is to read The Pilgrim's Progress at least once at some point in your life.  I'm not quite ready to pose a readalong because it is just one of those books that you have to read when it is the right time.  It's one of those books I have to digest a few pages at a time, otherwise my brain will explode.  LOL!