BW28: A is for Art Mysteries

A couple years back I was introduced to the writings of Iain Pears, a writer and art historian.   I happened to stumble across The Titian Committee in our local used bookstore and since I was taking an art class at the time, thought it would be interesting.    Which started my love affair with art mysteries.
Pears wrote a series of art mysteries centered around  a couple art historians Jonathan Argyll and Flavia di Stefano of Rome's Art Theft Squad.    His books are a fascinating, interesting and educational way to learn about art within a fictional mystery.   The books in the Flavia Di Stefano mystery series are:
Pears has also written four other stories including  An Instance of the Fingerpost, The Dream of Scipio, The Portrait, and Stone's Fall.
I had the opportunity to review Stone's Fall and discovered myself entrenched in a fascinating story. 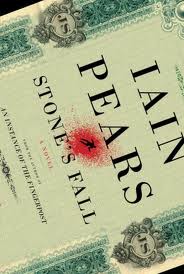 It is told through the view points of three men, in three different time periods and revolves around John Stone, his widow, Elizabeth Ravenscliff, and a mysterious child mentioned in Stone's Will.

In the year 1909, Matthew Braddock is hired by Elizabeth to find the child. In the course of his search, he meets numerous characters involved in Stone's life. One is Henry Cort. Henry Cort takes over the story in Part two beginning in 1890 and tells how he also became involved in the life of John Stone and Elizabeth. He tell the story of his evolution as a spy and how he played a roll in John Stone's life. He leaves a mysterious package for Braddock to open at a later point. John Stone takes over the story bringing the reader back to 1867 and how he evolved as one of the most richest and powerful men in the world. The story ends with a shocking twist that was totally unexpected.
I've since acquired An Instance on the Fingerpost, The Raphael Affair, and Death and Restoration.   An Instance on the Fingerpost is a chunky book at 750+ pages.  It's one of those books you need to clear the decks for because it will take a while to read. 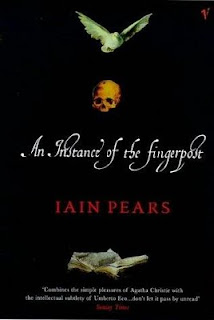 Amazon synopsis: "The year is 1663, and the setting is Oxford, England, during the height of Restoration political intrigue. When Dr. Robert Grove is found dead in his Oxford room, hands clenched and face frozen in a rictus of pain, all the signs point to poison. Rashomon-like, the narrative circles around Grove's murder as four different characters give their version of events: Marco da Cola, a visiting Italian physician--or so he would like the reader to believe; Jack Prestcott, the son of a traitor who fled the country to avoid execution; Dr. John Wallis, a mathematician and cryptographer with a predilection for conspiracy theories; and Anthony Wood, a mild-mannered Oxford antiquarian whose tale proves to be the book's "instance of the fingerpost." (The quote comes from the philosopher Bacon, who, while asserting that all evidence is ultimately fallible, allows for "one instance of a fingerpost that points in one direction only, and allows of no other possibility."

If you love art and you enjoy mysteries, there are quite a few other authors who also write art crime novels.  Check out the list from Amazon.