BW5: D is for Dekker


I discovered Ted Dekker a few years back. I've never been into horror but love psychological and supernatural thrillers. I came across THR3E in the bookstore, read the back cover and was intrigued: 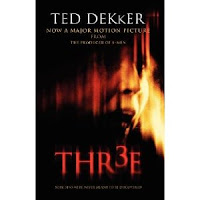 Synopsis: Kevin Parson is driving his car late one summer day when, suddenly, his cell phone rings. A man who identifies himself as Slater speaks in a breathy voice: You have exactly three minutes to confess your sin to the world. Refuse, and the car you’re driving will blow sky high.

Kevin panics. Who would make such a call? What sin? Kevin ditches the car. Precisely three minutes later, a massive explosion sets his world on a collision course with madness.

THR3E started my like affair with Ted Dekker and I've read most of his books, but not all.  Some I just haven't brought myself to read...yet.  He's multifaceted and has written fantasy, thrillers, supernatural thrillers, horror and mystery.   Good versus evil, angels versus demons, faith versus power, chilling villains and alternate worlds.   Some stories will cause a visceral reaction as your heart races and goose bumps spread across your skin and your imagination takes off. And others you read with bated breath, wondering what is going to happen next.
THR3E lead me to the Paradise series: Showdown, Saint and Sinner which revolved around the small town of Paradise, a mysteries stranger by the name of Marsuvees Black and a group of children living in a hidden monastary deep in the hills. It is a showdown between good and evil.

Then to the Blessed series about a innocent young child with the power of God and the fight to protect him:  Blessed Child and The Man Called Blessed written with Bill Bright.

Then I discovered the fantasy world of Thomas Hunter in the Circle series: Black, Red,  White and the one I'm about to start reading now Green.  It's been a while since I read the first three and I debated going back and rereading them, but decided not to.  It is consider the prequel to Black and the sequel to White if that makes any sense, bring the story full circle. According to Dekker:  "This is Book Zero, the Circle Reborn, both the beginning and the end."

I just noticed the colors of the covers  for the first time and the significance - isn't that cool!
And if you want to be truly scared out of your mind - read House co-written with Frank Peretti, the author of the spiritual warfare novels This Present Darkness and Piercing the Darkness.    It'll not only scare the pants off you, but make you want to sleep with the light on for a while.

Ted Dekker (full bio here)  is the son of missionaries and was raised in the jungle among the headhunters of Indonesia. He studied philosophy and religion and after earning his bachelor's degree, worked in the corporate world for a while until becoming a full time writer in the late nineties.   His latest book The Priest's Graveyard will be released April 2011.  I can't wait. 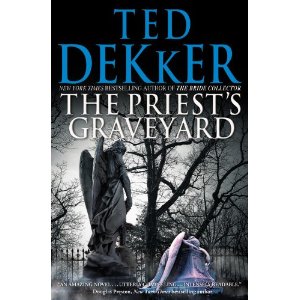 Two abandoned souls are on the hunt for one powerful man. Soon, their paths will cross and lead to one twisted fate.

Danny Hansen is a Bosnian immigrant who came to America with hopes of escaping haunted memories of a tragic war that took his mother's life. Now he's a priest who lives by a law of love and compassion. It is powerful men and hypocrites who abide by legal law but eschew the law of love that most incense Danny. As an avenging angel, he believes it is his duty to show them the error of their ways, at any cost.

Renee Gilmore is the frail and helpless victim of one such powerful man. Having escaped his clutches, she now lives only to satisfy justice by destroying him, regardless of whom she must become in that pursuit.

But when Danny and Renee's paths become inexorably entangled things go very, very badly and neither of them may make it out of this hunt alive.

Judge not, or you too will be judged.

Check out Ted's Library of books  or learn more about him on Facebook.   Read one of his books and I guarantee they will entertain, amaze, thrill and/or scare you.